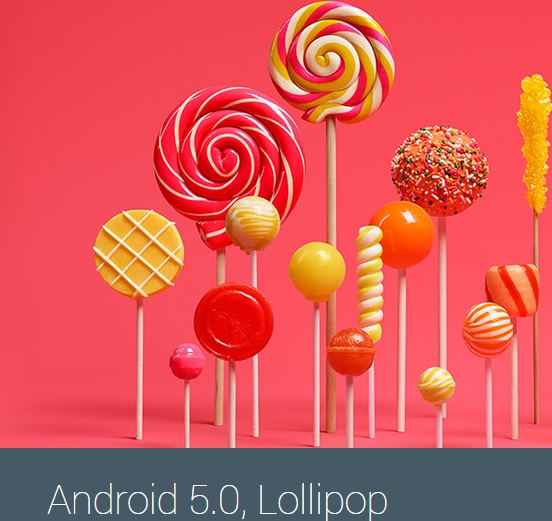 If you thought Android KitKat was yummy get ready for Google’s whole new operating system that will make your Android device‘s taste buds go wow! Google finally pull the curtain off its new Operating system Android 5.0 Lollipop aka Android L and quite like the name the new Android is a tasty treat that will take the operating system to new heights.

Hello! Material Design Interface:
Google has revamped Android’s User Interface to freshen the look of Android 5.0 Lollipop and the result is the biggest change in Android in 3 years. The new operating system brings whopping changes to the look and feel of Android, it has ‘Material Design’ which highlights shapes, colors shadows animations and pictures to deliver totally fresh user experience. To bring in the 3D effect on mobile Android L supports real time shadows, elevation values and various light setting that gives three dimensional feel.
Simple Geometrical Soft Keys:
When Google say that it’s simplifying things with every upgrade it literally mean that. Old home button, reverse arrow and two boxes for multiple windows have been replaced with easy geometrical figures like circle, triangle and square.

Smart Authentication Feature:
With the introduction of Android gear and so many different types of Android devices in market Google had to find a cohesive security system in new Android. So Android L comes with a smart security features that gel different Android device together to minimize the need of entering passwords each time you want to use your device. For example, if you are wearing an Android gear your Smartphone will identify your presence and will automatically unlock your phone.

App Indexing:
Thanks to new App index feature your Android Apps can communicate much better to minimize the need of manually transferring one data to another app.
For example if you search for a nearby hair salon in your chrome browser and open a link on yelp website. Now, the App Indexing feature will recognize the App in the search and once you click on the link it will directly take you to Yelp App.

Enhanced Notifications:
The redesigned notifications in Android 5.0 Lollipop matches the improved notification feature in iOS 8 that lets you see and respond to notifications while using an app.. Now if you get a call while using an app you will see the notification on the top of the screen and you can answer of deny the call without leaving the app. You can even set priorities your notifications so only important one appears on your screen while you are using another app.
Battery Saver Design:
Android L has something call “battery saver mode” that increase battery life of a device by shutting down the CPU and adopting battery friendly screen saver. Google has also introduced a battery savvy technology called “Project Volta” that helps its developer understand the battery usage much batter to create apps that uses lesser battery life.
Finally !!64 Bit Computing:
Apple users can no longer tease Android customers with their 64 GB iPhones cause Android is finally going to support 64 bit computing in its new OS Android L. Google not only brings 64 bit computing to Android phones it promises to deliver computer like graphics to your phone.