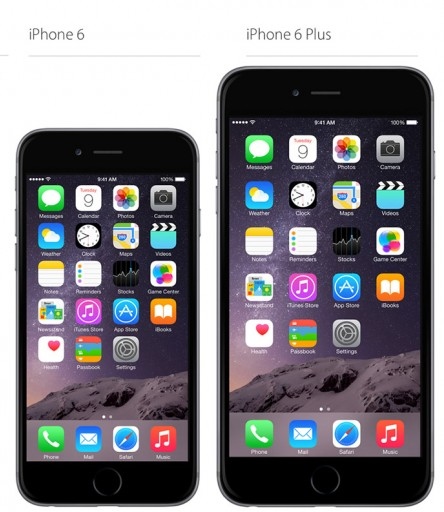 Apple has finally started taking pre orders of new iPhones and set iPhone 6 price in India at 53,500 while big screen Apple phablet iPhone 6 Plus is going to be much dearer at 71,500. The size of new iPhones have gone bigger and so does the price while Apple has set 4.7 inch screen iPhone 6 price in India at Rs 53,500 (same as last years iPhone 5S launch price) the bigger iPhone 6 Plus will sell for whopping Rs 71,500.

With new set of iPhone Apple is stepping into the big screen smartphone territory which could mint good money for the company in the big screen savvy market like India. However, high price tag may pinch Apple sales in the phablet market as the Cupertino giant’s top Android rival  Samsung Galaxy Note 4 is expected Rs15,000 cheaper than iPhone 6 Plus.

The 6th generations of Apple smartphones are probably the biggest change in the design ever since the first iPhone debut in 2007.

New iPhone 6 has much sleeker body with the thickness of only 6.9 mm. The smaller iPhone has got the resolution of 1334X750p on 4.7 inch screen with 326 ppi. The much bigger Apple phablet iPhone 6 Plus has also got much brighter display at 1920X1080 pixels resolution and 401 ppi.

In the camera segment although, Apple has kept the same old 8 megapixels camera it has a got many upgrades including DSLR like features that makes it one of the most efficient smartphone camera.

Both iPhone 6 and 6 Plus have 1.2 megapixels front and 8 megapixels rear iSight camera while the pricier one has also got optical image stabilization features. Apple official partners in India have already started taking pre orders and those you have placed their orders are expected to receive new iPhones on Oct 17, same day when Apple start selling iPhone 6 and 6 Plus in India.