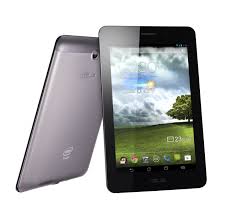 Following the lead of many electronic giants the famous hardware maker ASUS is all set to launch its new tablet ‘ASUS Fonepad Voice Calling’ in India this Diwali. ASUS is releasing its 7 inch tablet Fonepad that made its first appearance at the IFA Berlin festival in early September. ASUS is the company that designs the revolutionary Nexus 7 for Google but unfortunately, their own tablet Fonepad does not seem as perfect as Nexus 7.

The first thing you would notice about Fonepad is its bulky body, as the 7 inch tablet weighs 340 grams once you get used to the weight there is more to Fonepad. The new Asus Tablet has adopted the same display screen from its previous model that has the resolutions of 1280X800 pixels. The device is powered by Intel’s dual core processor that clocks at 1.6 GHz. It runs on Android 4.2 Jelly Bean and has 1 GB of RAM which is little disappointing.

Fonepad is available in 16 GB memory model but you can expand the memory through available microSD slot. ASUS is also offering lifetime free 5 GB web storage on ASUS Web Store.

The tablet sports a 5 megapixel rear facing camera which is common in mini size tablets along with 1.2 megapixels front facing camera for video chats. ASUS pushed the envelope withmore than 100 burst mode which are rare for a tablet. The rear camera can also record HD quality videos of 1080p.

The most surprising factor is the promising battery life in Fonepad Voice calling which gives you 35 days of standby time. The battery is good enough to last 28 hours of 3G talk and 10 hours of continuous video streaming.

The Fonepad is loaded with plenty of useful floating apps that give you the freedom to use your tablet like a PC. Thanks to these floating apps you can open up to 6 apps on a single screen at one time. The starting price of the tablet is set at Rs 17,499 which makes a tough competitor in mid range tablet market. Micromax, LG and Sony’s recent tablets