In another attempt to own the mid range market again Samsung has introduced a low budget Galaxy Grand Max for 15,999 in the Indian market. The new Grand Max will be the first budget Samsung to feature a new back panel that is inspired by the design of high end Galaxy S5.The device is going to be exclusively available on e-commerce website Snapdeal and comes in grey and white color options.

Samsung has dressed the Galaxy Grand with good specs and priced it right to make it clear that it is still one of the lead player in the market . It boasts a 5.2 inch screen with a TFT display of 720X1280 pixels.

The mid-range smartphone is powered by 1.2 GHz quad core Qualcomm processor and that is supported by 1.5 RAM. Android 4.4 KitKat functions as a brain of the device accompanied with Samsung UI touch wiz. 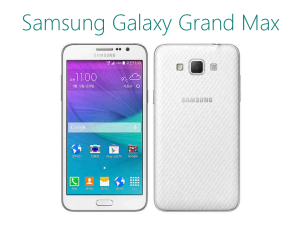 The Korean giant has puffed up the camera segment as well with 13 megapixels rear camera and 5 megapixels front camera with 120 degree wide lens for better group selfies. The camera also packs added features such as LED flash, autofocus and CMOS sensor.

As far as the connectivity options goes Galaxy Grand Max is going to be few of budget Galaxy devices that offer 4G LTE support along with 3G. Other standard features like Wi-Fi 802.11.b/g/n, Bluetooth 4.0, GPS, FM Radio and 3.5 mm audio jack.

The device comes with 16 GB internal memory which is expandable to up to 64 GB via micro SD slot. It is supported by 2500 mAh that should last whole day of normal usage. The Galaxy Grand Max would be competing with the Chinese majors like Xiaomi Mi4 and One Plus One that offer flagship features for a reasonable price.