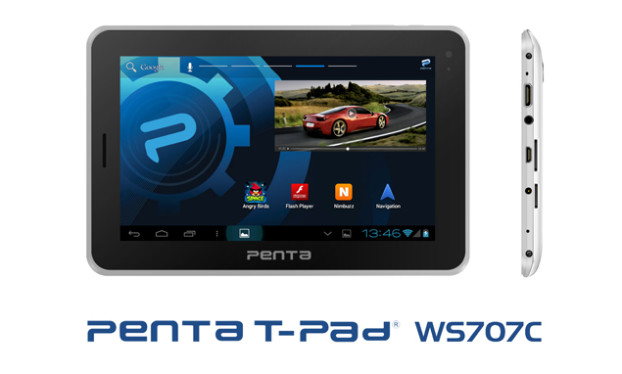 BSNL Tablet with Sim card are the new sensation in the affordable Android market as the telecom company joined hands with Pantel to bring Penta T-Pad WS 707C for RS 6,999 in India.

The tablet has multi touch capacitive touch screen and is powered by Cortex A-9 Single Core processor which is cloaked at 1.2 GHz. It comes with 1 GB Ram and has 8 GB internal memory but you can expand the memory for up to 32 GB through a microSD card.

BSNL’s Penta T-Pad WS707C tablet sports 2 megapixels primary camera along with 0.2 megapixels front facing camera for video chat. The tablet also has calling feature that means it gives you the comfort of a tablet and functionality of a smartphone.

The desi telecom company has also added two big screen Android smartphone and one feature phone to its existing line-up.

BSNL’s first entry in the big screen market is the Penta 501 that sports a 5 inch screen display that has resolution of 854X540 pixels. The smartphone runs of Android Jelly Bean 4.2 and sports the similar 1.2 GHz processor that powers the device. It comes with 512 MB RAM, 4 GB of internal storage and a micro SD slot that lets you expand the memory for up to 32 GB.

Penta 501 features a 5 megapixel rear facing camera and a VGA camera at the front and has 1800 mAh battery. Unlike older models this phone support 2G and 3G functionality enable wi-fi setting for accessing internet services. The maximum selling price of Penta 501 smartphone is 6,999 rupees.

The second entry in the smartphone Penta 650 is actually a phablet that has a whopping 6.5 inch screen. Like Penta 501 this smartphone also runs on Android 4.2 Jelly Bean, sports a 512 RAM and 4GB storage and microSD slot. The phablet has mere 2 megapixel rear camera and VGA front camera along with 2,500 mAh battery. IT has a starting retail price of RS 7,999. Both smartphone has dual-sim functionality.

To attract the consumers BSNL is offering freebies as 3GB of free data along with free talk time of 300 minutes.