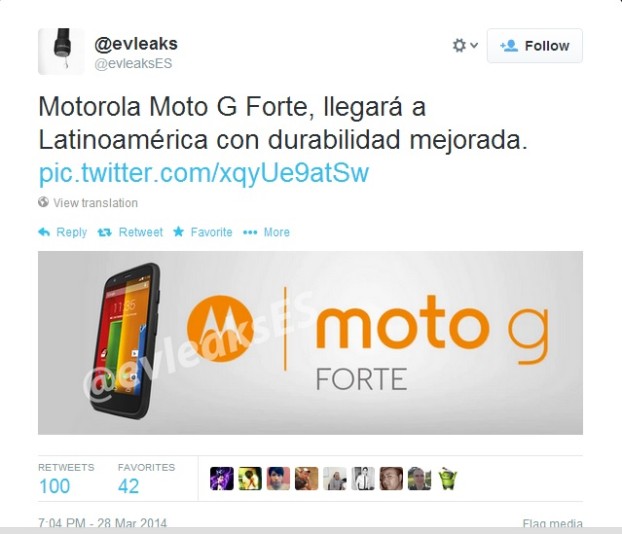 Moto G the best selling Motorola smartphone is getting a water proof twin very soon. Popular tipster evleakes recently tweeted an image of Moto G Forte on its twitter timeline stating its the upcoming rugged version of mid range Moto. There is no imformation the price of this new water proof version of Moto G.

Although evleakes did not release any details about the design change in Moto G to make it durable but we highly doubt there would be major changes. As per the picture posted by evleakes Moto G forte looks a little bulkier than original Moto G and the glossy plastic back look less glossy in Forte.


Motorola Moto G is the mid range smartphone from Motorola that runs on latest Android 4.4 Kitkat and has a powerful 1.2GHZ dual core processor coupled with 1 GB RAM. Its smart 5 MP camera and front 1.3 MP camera complement the midrange model well. Moto G’s bright 720p display underneath the scratch free corned Gorilla glass is nothing like other rivals offer at rupees 12,999 in India.

Statistic spell that Moto G has been a thorough success for Motorola and perhaps the Moto is trying to cash on the opportunity by launching slightly modified version of Moto G.

If you are one of those people who often drop or break your smartphones perhaps Moto G Forte might have something for you.  Current Moto G owners can make their smartphone more rugged and durable by using Grip Shell Case Design for Moto G.

Web is filled with videos that show that Moto G with protective covering (Grip Shell Case or Similar Design) can survive in deep water for about 30 minutes.