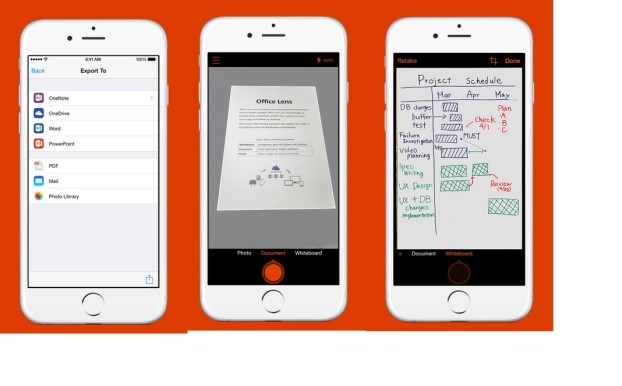 Microsoft has launched its popular scanning Office Lens app for Android and iOS which will work with Onenote on both mobile platforms. Office Lens uses your phones camera to scan and digitize all sorts of documents from whiteboards to business cards and receipts.
Microsoft’s scanner app is one of the many screening app already available on iOS and Android but some of its unique feature sets it apart from the crowd. Office lens automatically recognize printed text with the help of OCR and identify dozens of languages, pictures and posters.

The app features two different modes Whiteboard and Document which trims, cleans up shadows, make color corrections and saves documents in different MS office formats. It’s a bonus if you already use other Microsoft product on your Android and iOS devices as everything you scan directly goes to your OneDrive folder or selected cloud space.
While most of good scanning apps require a purchase this one is free and doesn’t provide additional features that paid apps offer. The office lens lacks contrast correction so scanned documents look shadowy and more like a picture than a document. Moreover, if you want to save a document in a PDF format having a Microsoft account is a must.

In order to download the Office Lens app on Apple device should be running iOS 8 or later version of the operating system. Similarly Android devices running Android 5.0 Lollipop would be able to make the most of the Microsoft app.
Overall it’s a great free add-on app for Android and iOS users who use other Microsoft product on there devices and everyone who is looking for a descent free scanning app.