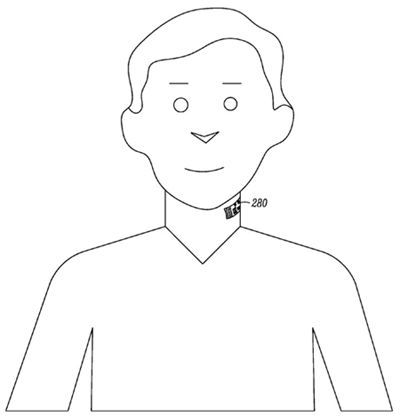 Google (GOOG) patents filling recently revealed that the Motorola Mobility company is planning on building electronic microphone that could be tattooed on your throat. No, today is no 1st April and Halloween is over, so I have no intentions to scare the hell out of you.

Honestly, I got Goosebumps while reading the patent application that Google Motorola Mobility division submitted to US Patent and Trademark Office. The report was submitted on May 3, 2012 and the USPTO has released the details of the application this Thursday.

At first the idea sounded creepy to me but it started making sense when I continue to read the details of this so called Tattooed Electronic Microphone.

The basic idea of Google’s this new patent revolves around noise cancellation technique. As we all know it is hard to have a clear conversation on a mobile phone without getting background noises mixed in your talks.

Given that Google’s E microphone will be placed inside your throat, it will automatically cut down all the noises coming from outside world. As a result, you can have clear conversation at most noisiest places like stadiums, movie theaters or while doing a vacuumed or operating a blender.

The tattoo will act like a mobile communicating device (MCD) that could get a network from near field communication (NFC) for two way communication. The device will get power supply through battery and could be operated through a hardware switch for turning it off and on.

The most interesting optional feature is the lie detector which would react on the changes in your skin tone and temperature . As this galvanized device will detect changes in your skin and compare them with your normal reaction to analyse your nervelessness and other quotient known to detect a lie.

Other added features in this tattoo could also help you to send text messages and terminate a call from this device. There are various versions for this tattoo that mostly work like additional features that enhances the capability of the device.

Among the various additions what surprises me the most is the feature that could include a display with user interference. However, the patent did not elaborate on this addition, leaving it a mystery that how could a throat tattoo will be able to give you a display?

That not all the patent is filled with awkward technology changes that sound bizarre to me. Perhaps it is too early and too little for us to absorb the information, but I am sure of one thing; Google will have to do a lot of convincing before they could tattoo people’s throat.