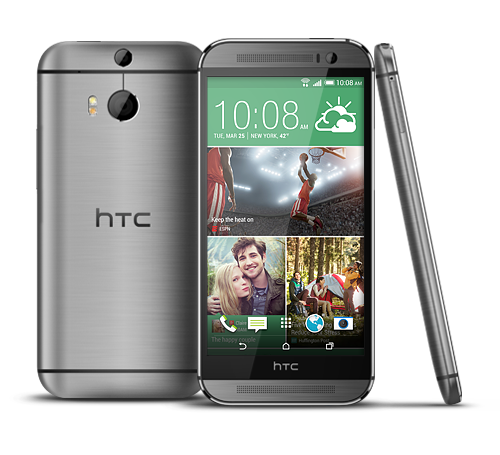 The Taiwanese mobile maker HTC unveiled its new high metal flagship smartphone model HTC One (M8) that has a curved wraparound unibody frame. Sticking to its high design choices HTC has build this smartphone to look and feel solid in hands but the metallic design has also made it a little bulkier than other rivals.
But the convenient wraparound frame make up for the extra weight. Overall it’s a solid piece of hardware and perhaps the only Android that could give close fight to latest iPhone in terms of sturdy hardware.


The HTC One M8 has got bigger than its predecessor and sport 5 inch display screen that has a 1080p full HD resolution. The display size is close to 5.1 inch screen in Samsung Galaxy S5 and 5.2 inch display of LG G2.
HTC has tried to win the power battle in Android by putting a Qualcomm Snapdragon 801 processor in its new flagship while most other rivals run on Snapdragon 800 in their flagship. The snappy processor is accompanied with a quick charge technology in M8 that promises to charge the handset 75% percent faster than usual and more battery life than the older HTC One M7.
Surprisingly, the faster charging option does not come standard in HTC One M8 and the Taiwanese mobile maker promises to launch it later sometime.
If metallic body makes HTC stand out in Android crowd its high performance speakers are another feature that is unique to HTC.


The Boom Sound front speakers in M7 have got a boost in M8 as the redesigned speakers offer 25% more amplification than its predecessor. However, the new HTC flagship is not powered with Beats Audio the overall sound quality still surpasses previously Beats powered M7.

Along with latest Android 4.4 KitKat the top layer of company’s Software in HTC’s new flagship also has some tricks on its sleeves to ante up the game in Androids. It’s filled with customize gesture and touch features that make one hand operation much easier in M8.
Similar to Samsung Galaxy S5 HTC One M8 too sport an extra power saving mode that allows you keep your smartphone alive for long time in critical situations.

The HTC One M8 is already available at major carrier providers in US from Today and it is expected tp arrive in Indian in first week of April. There is no news on the price details of the smartphone in India as of now.