Lenovo Vibe Xtention Selfie Flash is one of the things at CSS that may seem little but turns out to be big problem solver. This pocket size flash nicely plugs into the audio jack of a smartphone and the small ring flashes 8 diffused LEDs to one meter radius range.

Smartly this ring distributes the flash light on a larger area so instead of getting a harsh beam of light you get wide range brightness that is enough to capture a perfect selfie in low light. Although Lenovo is branding this pocket flash as a Selfie centric device but the tool also works as a rear camera flash and provide much brighter light than an average smartphone LED flash. 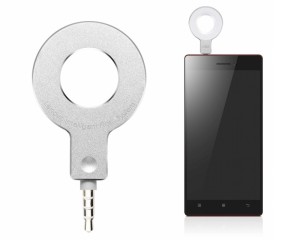 Moreover, the compact flash 100 percent synchronize with your smartphone camera shutter to deliver the best lighting possible for perfect selfie. The tool delivers about 100 flashes with a single charge which is probably good enough to last for a week for most selfie frenzies.

Lenovo is selling the Vibe Xtention Selfie Flash for $29 which sounds like a real good deal but here is the catch, the pocket flash is designed to work with Android smartphone that supports a compatible app. As far as iPhone 6 and iPhone 6 Plus users are concerned the audio jack on both devices are located on the bottom so clearly the pocket flash is not designed for Apple users.

Tough luck for Apple and Windows Phone users but then again rumors has it that Apple may be launching a similar product along with iPhone 7 this year. In the meanwhile Lenovo Vibe Xtension Selfie is going be available on Lenovo’s website from April this year.