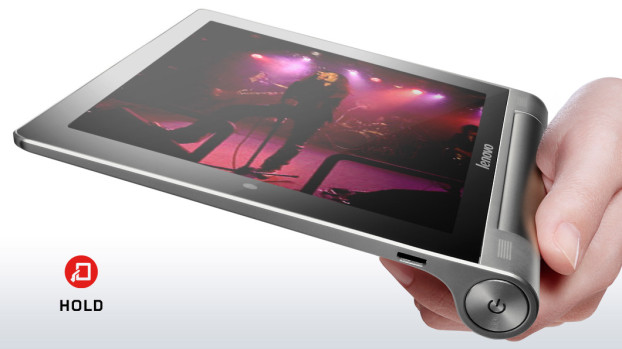 Lenovo, the popular hardware maker has given a new perspective to tablets with its Lenovo Yoga Tablets that has unique design. The new Yoga tablets have a clean this surface that connects to a cylindrical pivot. The tablets have a firm design and aluminum kick stand that allows you to change the position of the tablet.

The tablet can be set in three different positions without the need of any accessory. Lenovo says that the cylindrical edge of tablet holds most of the heavy hardware so it feels really balanced when you hold it from that edge.

This unique tablet comes with somewhat typical features like 1.2 GHz quad core processor from average performer MediaTek . It has a screen resolution of 1280X800 which is slightly lower compare to the other tablets in the same category. Yoga tablet also features a memory slot to expand the memory.

The tablet sport 5 megapixels rear facing camera along with 1.2 megapixels front facing camera and Dolby Digital plus DS1 speakers at the front. Another plus is the powerful battery in Lenovo Yoga Tablets that promises to give you double battery life than average tablet.

The 16 GB, 8 inch Lenovo Yoga tablets is going to cost $249 while the 10 inch version will come at $229 in US. Lenovo is also offering accessories like Keyboard dock for $70 and protective cover cases for $30 to make the tablet more functional.

With the price Lenovo Yoga Tablet is a direct competition to Nexus 7 and Sony Xperia S tablets which fall in the same price category. However, Lenovo has the advantage of looks it will be hard for the company to snich buyers from already established tablets like Google and Sony.

The tablet was launched in Los Angeles by hollywood actor Ashton Kutcher who has also joined Lenovo as a product engineer for yoga tablets. The actor has recently played Steve Jobs in the Movie Jobs and he is now going to taste his engineering skills for hardware maker Lenovo.

Kutcher, who is known for his versatile roles in the movies and TV show, has studied biochemical engineering from University of Iowa. The actor is also associated with technology giants like Apple and Google as tech investor.