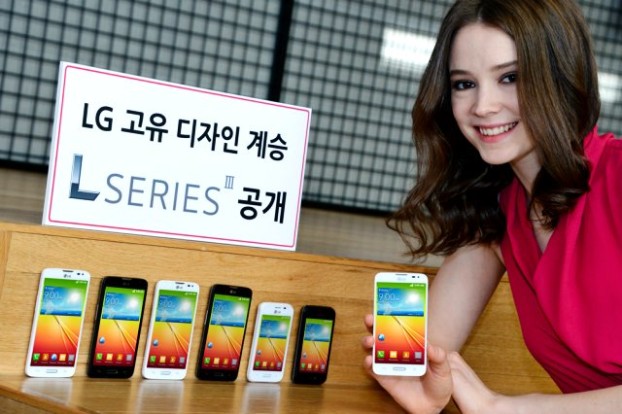 LG electronics, the popular South Korean mobile maker has added three new budget smartphone l40, L70 and L90 to its existing L series line up. All three smartphone will be launched in the Mobile World Conference which is going to be held in Barcelona from 24-27 February.

This affordable LG line up is going to offer Android 4.4 KitKat out of the box which would put them in a rare budget breed that offer latest Android. All three models are designed to cater different consumers need and are expected to be in the 5K, 10K and 15K range respectively.

The first entry LG L 40 is a low budget smartphone that has 3.5 inch display screen with the resolution of 320X480p. The screen size and resolution suggest that L40 could be in the range of 5,000-7,000. It sports a powerful 1.2 GHz dual core processor that is coupled with 512 MB RAM and 4GB memory. L 40 comes with 3 megapixels rear camera but does not has a front camera.

The second LG budget model L70 has much bigger and brighter screen compare to L40 as it feature 4.3 inch screen with 400X800p resolution display. L70 has been packed with the same 1.2 GHz processor and 4GB memory but has double RAM size with 1 GB. The smartphone will have average rear camera along with a VGA front facing camera.

The third and the most decked up budget model L 90 has wide 4.7 inch display with 540X960p resolution screen. It has the same 1.2 GHz dual core processor as above two that’s supported by 1 GB RAM.

L90 comes with 8 GB memory and 8 megapixels rear camera. An 1.3 Mega Pixels camera has been placed at the front. All three models L40, L70 and L90 sport micro SD slot for expandable storage.

LG has hold the price and availability details of all three smartphone for the MWC where the company os also announcing its next flagship model G Pro 2 an G2 mini.