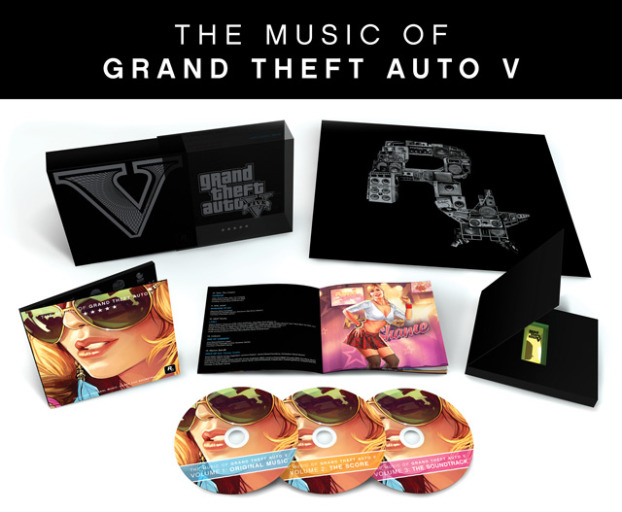 Fans of Grand Theft Auto 5 or GTA 5 are already excited as the game is going to come on Xbox One, PS 4 and PC very soon. However, the games New York-based developer Rockstar Games has given more reason to cheer.

Rockstar Games and Mass Appeal Records have decided to come up with an exclusive collection of GTA 5 music tracks. ‘The Music of Grand Theft Auto V’ limited edition collection will be released in CD and vinyl version with some impressive artworks.

The vinyl version of the collection will contain six records of GTA 5 music and will be delivered with a full-colour booklet and an exclusive lithograph poster. All these things will be delivered in a classic box-set.

The CD version is going to have a set of three CDs containing all the GTA 5 music, an exclusive lithograph poster, the all-colour booklet with some art work and a GTA 5 branded gold brick-shaped USB drive.

Both the version of the music collection are going to have 59 tracks of GTA 5 music from modern artists Twin Shadow, Wavves, A$AP Rocky, Yeasayer, Tyler, Flying Lotus, The Creator and more.

In addition, these limited editions will feature the original score composed by Tangerine Dream, Woody Jackson, The Alchemist + Oh No, mixed by DJ Shadow, along with the other incredible music featured in GTA 5.

Limited to a production run of under 5,000 units worldwide, these limited editions will be available from December 9 at top online and physical record stores.

Take-Two Interactive, the parent company of Rockstar Games, after its this year’s financial results had said that the company is gearing up for a game release that will be for next generation consoles.

Take-Two posted 94 percent revenue growth for the fiscal year 2013-14 and according to the company, major contribution in the $2.214 billion revenue comes from Grand Theft Auto series.

The Grand Theft Auto 5 reached $1 billion in sales faster than any entertainment release in history.