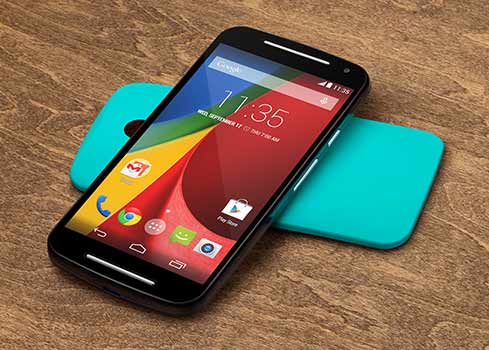 Motorola today announced its next generation models of most popular line up Moto G and Moto X in India along with much awaited Moto 360 Smartwatch in its Namaste Moto event. Moto G (Gen 2) will go on sale on Morotola’s exclusive e-commerce partner Flipkart website while Moto X and Moto 360 are expected to arrive later this month. The new Motorola Moto G is priced slightly above its predecessor at Rs 12,999 for the 8 GB model.

Moto G
Coming to the specification new Moto G is a major feature revamp from the last model that went ahead to become one of the largest selling phones by Motorola. Moto G (Gen 2) boast 5 inch display screen that has a resolution of 720X1280p and sport two front speakers. Another big change is in the camera segment where older model’s 5 megapixels rear and 1 MP front camera has been replaced with 8 megapixels back and 2 megapixels front camera.

New Moto G (Gen 2) is powered by Android 4.4 KitKat which is the latest Android but Motorola assured an upgrade to Android L once it is available. Another welcome change is the introduction of micro SD card for memory expansion which was missing in original Moto G. However, the device still runs on 1.2 GHz quad core processor and comes with 1 GB RAM like last year Moto G model. 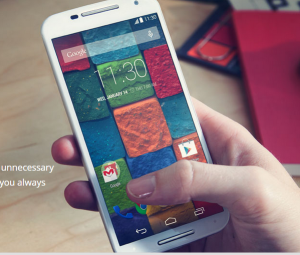 Moto X
The success of its low budget model has not insipid Motorola to endow high end model as new Moto X seem like a well thought upgrade to original Moto X. Gone is the polycarbonate plastic frame as next generation switch to metallic frame that is more sturdy and stylish and super sleek. Talking about the style Moto X has more designs to its interchangeable back cover while keeping the original wooden paneling and leather back.

Now in specs Moto X sports 5.2 inch full HD AMOLED display with the resolution of 1080X1920. The device is powered by 2.5 GHz Qualcomm Snapdragon 801 processor and supported with 2 GB RAM. The smartphone sport 13 megapixels rear camera and 2 MP front camera with is equipped with LED flash and rear lens is capable of recording 4 K quality videos. This high end Moto runs on latest Android 4.4 KitKat as well and you can expect timely upgrade to next Android L once it is available. 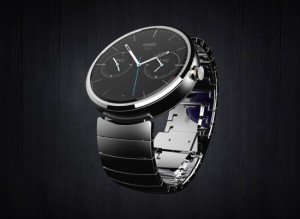 Moto 360
The long coming Android Wear smartwatch Moto 360 comes with 6 preloaded digital watch faces to choose from. As far as wristband is concerned Moto 360 lets you choose from leather and stainless steel options. The coolest feature of the watch is that it responds to your voice to pull data from apps like showing direction from Google Maps or opening Gmail.
Android wear also turns your smartwatch into a fitness gear with daily summaries of your work out, heart rate monitor (only on compatible devices) and total steps taken towards your fitness goal. The device also comes with powerful battery that promises around 2.5 days run time with one charge.