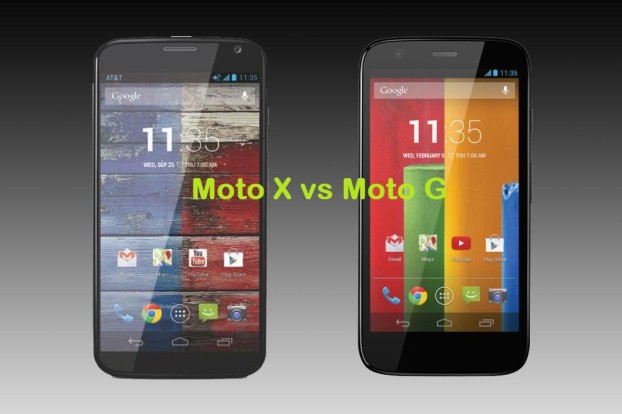 After enjoying a record sell of Moto G Motorola launched its high end smartphone Moto X  in India on Wednesday. The mid range Moto G is almost half the price of costlier Moto X but the later packs features of high end model which are hard finds in the cheaper Motorola model.

Here we have the feature showdown Moto G vs Moto X that breaks up the difference between two mighty Motorola smartphones that fall under different price range.

Both the Moto G and Moto X are well built pieces of hardware that are designed with good plastic material for better grip. By the look of it you can hardly make out the difference between both smatphone except for the fact that Moto X is customizable while Moto G is not.

However, since India is not getting customized models of Moto X we will have to skip that difference here.  Moto G has a slight dimple on the back that helps to pop the back panel easily but it is missing in Moto X.

Moto G has 4.5 inch display screen while the big brother Moto X sports 4.7 inch display screen, both smartphone have similar 720X1080 pixels resolution. The scratch resistant corning Gorrila glass is another thing that is found in both Moto models.

Latest Android 4.4 KitKat is now available for both smartphones but despite same software Moto X has some extra features to offer. The no touch voice response in Moto X is exclusive to this high end Motorola, the smartphone learn to recognize your voice.  Just say Google now and then your command Moto X search the web, open mails, set alarm without a touch.

The price difference becomes visible in the camera section of these two distinct Motorola models. Moto G comes with 5 Megapixels rear camera and 1.2 megapixels front camera but the high end Moto X plump up the volume and pack 10Megapixels rear and 2 MP front camera. Moto X also has a unique feature that activates the camera just with a flip but it would be too much to ask for in the low end Moto G.

There is a reason why Moto G enjoyed whopping sell record in India, it is without a doubt the best smatphone available in the mid range. However, if you have got extra cash in your pocket and want something more from a smartphone Moto X is fit the bill perfectly.

If Moto G can be labeled as best mid range model Moto X deserves that title for smartphone under Rs 25,000. We don’t mean to brag but truth is no smartphone from big brand names come closer to what Moto X offers for the price. Both Motorola smartphone were announced in India by online retailer flipkart which is selling Moto G and Moto X  exclusively on its e commerce website.