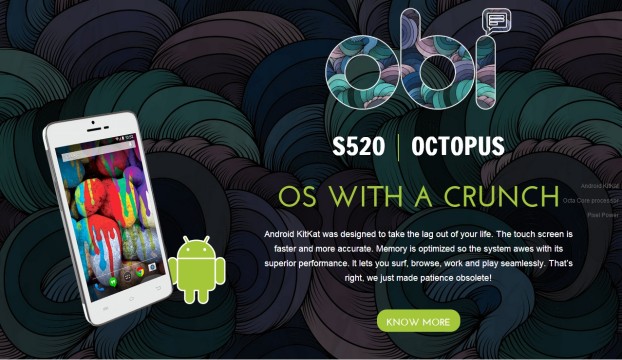 The already crowded budget segment of the Indian mobile market has got a yet another big player, and this time the product, Obi Octopus S520, comes directly from a company backed by an ex-Apple Inc CEO.

Obi Mobiles, the new entrant in the market, launched its Octopus S520 to grab the toughest share of the market pie with some of high-end features and affordable price.

You must have already got to know about the specifications, features and the price of the new Obi Octopus S520, however, for those who have just tuned in we will quickly refresh those details.

The Obi Octopus S520 comes with a 5 inch HD IPS display with 720×1280 pixel resolution. The smartphone is powered by a pretty powerful octa-core processor clocked at 1.7 GHz. The Obi Octopus S520 has an internal storage of 8 GB and it supports maximum 32 GB of external memory with the help of a microSD card.

The device’s smooth run is depending on 1 GB of RAM which is expected to be enough to support an octa-core CPU.

When it comes to cameras, Obi Octopus S520 sports an 8 megapixel rear-facing primary camera and a 2 megapixel of front-facing camera.

Here is a quick shoot out at the specs:

The Obi Octopus S520 is going to give a tough fight to products like Motorola’s Moto G, Micromax’s Canvas series, and HTC Desire 616 because of its price, which is fixed at Rs 11,990, and its sleek looks and design that resemble earlier iPhones.

The smartphone is going to be among the very few smartphones running Android 4.4 KitKat and yet costing lesser than Rs. 15,000.

“S520 is engineered to highest quality specifications to reliably deliver a superior performance. This flagship device is an affirmation of our stated commitment to extend the best in class smartphone experience,” Obi Mobiles CEO Ajay Sharma said during the launch.

We will be coming up with more about the product after getting our hands on this sleek device.