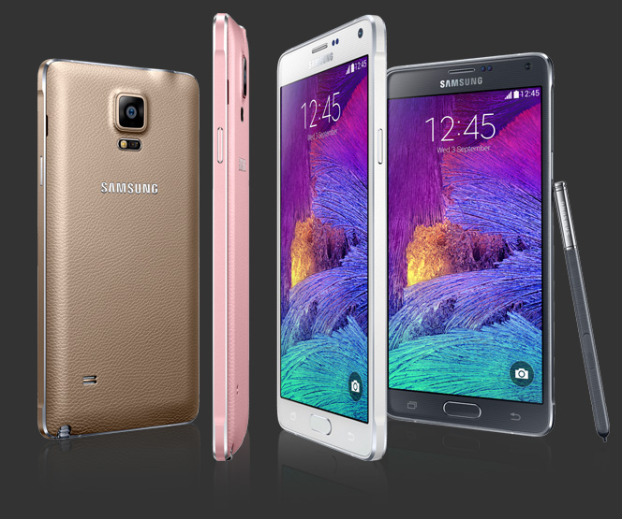 The wait is over and the battle between Samsung and Apple is all set to begin in the Indian market as Samsung brings its latest flagship smartphone, the Samsung Galaxy Note 4, in the country.

Samsung launched the Galaxy Note 4 phablet along with its Gear S smartwatch in New Delhi, however to buy these products, people will have to be little patient.

According to the company, the Galaxy Note 4 will go on sale from October 17, the same day when Apple’s iPhone 6 Plus will also hit the market. It is still unclear that when will Gear S hit the stores.

Samsung has come up with some major changes in the Galaxy Note 4 as it has to appear in direct competition with Apple’s iPhone 6 Plus.

The Galaxy Note 4 is going to come with a 5.7 inch quad HD super AMOLED screen. The screen size stays the same like the Galaxy Note 3. However, the new display comes with a glossy look and curved design with a tougher protection.

The performance of the Galaxy Note 4 is going to be smooth thanks to Qualcomm’s Snapdragon 805 quad-core processor which is clocked at 2.3 GHz and the 3 GB of RAM.

The camera of the Galaxy Note 4 is also something which can lure your into buying this phablet. Samsung has introduced a 16 megapixel primary camera into the Galaxy Note 4 with an LED flash light at the same place where they were fixed in the Galaxy Note 3. The secondary camera will also be appreciated by selfie lovers as it holds a 3.7 meagpixel sensor. The primary camera comes equipped with optical image stabilization feature so your shots won’t get blurry even if you cannot keep your device dead still.

The front camera has also got some additional features like wide-angle mode that will let you click a selfie with panoramic view.

Signature function of the Samsung Galaxy Note series, the S Pen, is place at the bottom right on the back of the Galaxy Note 4.  The S Pen function has also been improved and now you can do a lot with it. The stylus identifies text on an image file and lets you edit it by converting into an S Note.

With the help of S Pen you can also select a section of a webpage and either can read later or can email to a friend. Switching between apps has also become easy with the new S Pen.

The Samsung Galaxy Note 4 is going to be available in the Indian market from October 17 and is priced at Rs 58,3000.