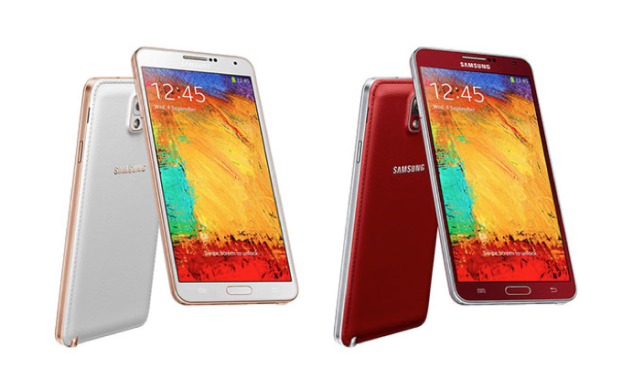 Samsung announced new addition to its colorful Samsung Galaxy Note 3 line up and introduced Merlot Red color along with gold and silver accent touches to its existing models. The previously launched white and black color models also got makeover with a dash of gold in the accent details. Both models are now available in ‘Rose Gold White’ and ‘Rose Gold Black’ options.

According to Samsung the ‘Rose Gold White’ addition will hit the Chinese market by the end of December but there is no official word on other models availability. However, the new red ‘Merlot’ color is expected to hit the world market in the beginning of 2014 while the units with gold accent touches will be available as per the demand in various regions.

The South Korean mobile major has only launched only two Galaxy Note 3 variants ‘Black and White’ in India. Although, the pink color variant is also doing rounds on India online stores but it is not yet available in the country.

Taking a cue from iPhone 5S gold edition’s success Samsung has designed the gold accent phone to lure consumers in the Asian market where gold is considered a symbol of prosperity.

Apart from gold accent in Galaxy Note 3 Samsung is also planning on launching a gold addition of Galaxy S 4 but there is no news on its availability. Samsung first posted a picture of a gold painted Galaxy S 4 on its official gulf twitter page about 2 months ago.

The Galaxy Note 3 has Super AMOLED full HD screen that sports a breathtaking display of 1920X1080 pixels resolution. It has a faux leather finish that has never been seen in any Samsung phone as of now.It has whopping 3 GB RAM, improved S pen and security feature Knox to keep your work and personal details safe on your phone. The black and white variants of phablet are available in India for a starting price of 49,900 RS but you can also find it on discount prices on few retail stores.