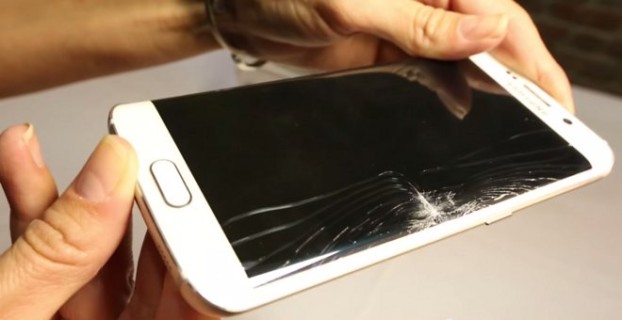 Guess what is common between Galaxy S6 Edge and iPhone 6 Plus? “Bendgate”. Not so long ago Apple arch rival was mocking iPhone 6 Plus for infamous bendgate but today Samsung is busy saving its Galaxy S6 Edge from the same scrutiny. After a video of scientific experiment on new slim Galaxy S6 Edge claimed that it is more prone to bending than iPhone 6 Plus that started the whole bendgate saga last year Samsung quickly came to defense.

An electronics warranty services company Square Trade put Samsung’s new Galaxy S6 Edge to a taste and noted that it is as likely to bend as an iPhone 6 Plus. More interestingly the report suggest that while the iPhone 6 Plus’s glass screen bends on certain pressure Galaxy S6 Edge’s the screen cracks up in pieces.

Rattled by the criticism Samsung which is just began to ship its new smartphone responded to “Galaxy S6 Bendgate” with the same explanation that Apple had back in September 2014. The official blog post of Samsung on the bendgate reads “the video (bending test) assumes a very specific condition – 110lbf (50kgf), which rarely occurs under normal circumstances.”

The Korean major’s blog further explains “The normal force that generated when a person presses the back pocket is approximately 66lbf (30kgf). Our internal test results indicate that the Samsung Galaxy S6 and S6 edge are not bendable even under 79lbf (32kgf), which is equivalent to putting pressure to snap a bundle of five pencils at once.”

Samsung has also released a three point bend test video of Galaxy S6 and S6 Edge explaining that its device are sturdier than what shown in the Square Trade test.

Last year Samsung ran an ad campaign against iPhone 6 Plus bendgate claiming  “The Galaxy Note 4 is big, thin and light but strong.” Today Samsung is going Apple’s way with slimmer smartphone but as long as it sells more devices we don’t think Samsung would mind being haunted by the same bendgate ghost it created last year.