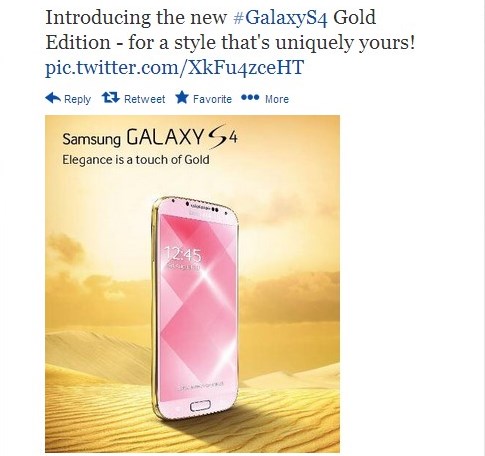 Samsung is following rival Apple’s footsteps by launching a glittery gold edition of its latest smartphone Galaxy S4 . The Korean company announced the news by posting a picture of its new gold colored Galaxy S4 on Samsung’s gulf twitter page. The company has not revealed the price and availability of its gold smartphone as of now but it is almost certain that the ‘bling’ will reach the gulf countries.

The pictures posted by the company on Samsung Gulf twitter page shows gold covered edges of its flagship model Galaxy S4. However, it is unsure that if Galaxy S4 will sport gold plated back like iPhone 5s. Perhaps the gold S4 is in the making since the company has not yet listed the gold S4 on any of its website for pre-order.

It’s noticeable that Samsung’s arch rival Apple has released gold plated iPhone 5S early this month that became a success story for the California based company. Gold iPhone received overwhelming response at both online retailer stores and Apple stores around the world. Perhaps Samsung is trying to cash on the gold phenomena created by Apple. Although, Apple is not the only company to produce Gold plated smartphone as another Android smartphone giant HTC produce gold color models as well.

In order to distinguish its product from Apple, Samsung has chosen a darker and earthier shade of gold compare to ‘Champaign gold’ of iPhone 5S. Apple fans might blame Sansung for being a copy cat but we can’t say that we hear more insides on gold Galaxy S4 from the company.