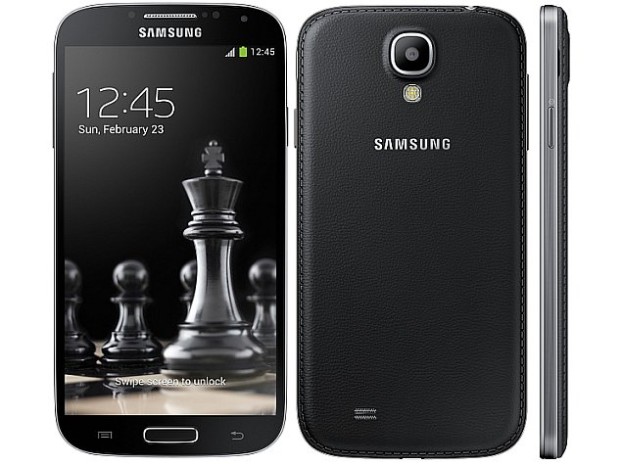 Samsung has revealed a new black edition of its current flagship smartphone Galaxy S4, Galaxy S4 Mini that sports leather back.  The special black edition has been listed on company’s Russian website, but there is no news on price and availability of the new model.

The Korean giant is trying to give its consumers a taste of Galaxy Note 3 in its older model as the leather back was first launched with its latest phablet.

Although Samsung has quietly listed the new additions in the current S4 without much information many Russian retailers are advertising it to be available in Feb. Popular Russian mobile retailers have listed Samsung Galaxy S4 and Galaxy S4 Mini for around Rs 40,000 and 28,000 in Indian currency.

Apart from their distinctive color and leather back for better grip both fresh models have same specs as their older counterparts.

Samsung Galaxy S4 has 5 inch display screen with the resolution of 1080X1920 pixels with Super AMOLED display. It has 13 megapixels back camera along with 2 megapixels front facing camera.

The power 1.6 GHZ processor of Galaxy S4 has been paired with 2 GB RAM. The device comes with 16 GB storage that is expendable to 64 GB via micro SD card.

The smartphone comes with an 8-megapixel rear-facing camera and a 1.9-megapixel front-facing camera for video chat. The device has an 8GB of internal storage and supports micro SD card of storage up to 64 GB

Both models are expected to reach other countries pretty soon as Samsung would like to sell them before it gears up for the launch of its upcoming flagship model Galaxy S5 which is expected to hit markets in May.