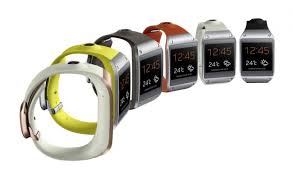 The kick off day of Berlin’s IFA witnessed several cool gadgets but Samsung stole the show with the launch of three of its major products. The Korean company revealed its much talked about smartwatch Galaxy Gear along with long coming Galaxy Note 3 and 10.1 inches Galaxy Tab 2 on the first day.

Galaxy Gear has 1.63-inch superAMOLED screen with a resolution of 320×320 pixels framed in a metallic body. The smartwatch has a rubber strap that is available in six different colors. It also sports basic 1.9 megapixel camera and comes with 512MB internal memory. The wearable is powered by an 800 MHz processor. The smartwatch could be sync with latest Galaxy smartphones and tablets to perform simple tasks like making calls and playing music. The Gear will be loaded with more than 70 popular Apps that are available for Android. The Galaxy Gear will be available in almost 127 countries later this month but the price of the gadget is not yet revealed by the company.

Continuing the innovation spree, the Japanese electronics giant Sony introduced its another waterproof Xperia model, Z1. The smartphone that has 5-inch display and 20.7 megapixel camera could be Sony’s answer to Nokia Lumia 1020 that has unbeatable 41 megapixel camera. That’s not all; Sony also announced a line of Cyber Shot lens cameras that are designed to work with almost every smartphone if you use an adopter. The second Smartwatch from Sony called Smartwatch 2 was also revealed at the event.