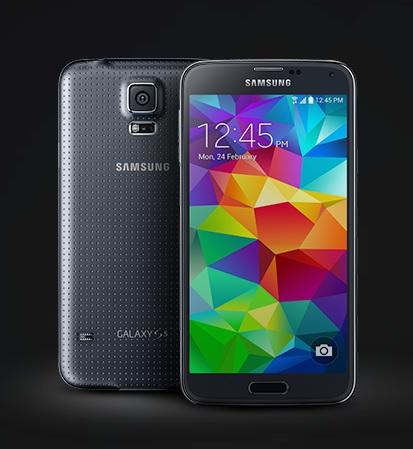 When Samsung launched its next big thing at MWC today it was the moment of truth for many fans who have digested every bit of rumor about the phone in last several months. But yet when Samsung Galaxy S5  was unveiled today it was nothing like anything anyone had expected.

Samsung slammed a lot of rumors with the introduction of S5, the much talked about metal chassis and  4k display are not part of this new Galaxy S5.

But Samsung has gone bigger with Galaxy S5 in terms of display as the next Galaxy features 5.1 inch display screen. The Korean biggie has provided the same 1080p Super AMOLED display in S5 which is found in Galaxy S4.

It has a shiny changeable back panel though which is designed with lather like material and has a sturdy feel compare to previous S series model.

Galaxy S5 is powered by 2500 GHz quad core processor and has 3 GB RAM to make full advantage for increased pixel size in the new model. As expected it runs on Android 4.4.2 Android KitKat which is the latest version of Android.

The 16 megapixels camera found in Galaxy S4 zoom has made its way to the next flagship model of Samsung. The 16MP primary camera is paired with 2 MP secondary camera but the megapixels are just one part of the Samsung S5 camera. The autofocus provided by the South Korean major in this phone is what defines the fine camera in S5, it has the ability to capture photos at the speed of 0.3 second.

After Apple launched iPhone 5s with fingerprint scanner last year Samsung knew it had to catch up. Therefore, the Galaxy S5 features a fingerprint scanner that allows you to unlock your phone with the touch of finger. However, Galaxy S5 falls one step behind iPhone 5S as you have to press the home button to activate the service which is not the case in iPhone 5S.

It may not be as fancy as one would have expected but Samsung has delivered on the basics that matter to most. Galaxy S 5 is water and dust resistance thanks to its protective tabs which are introduced to compete with rival Sony that already has dozens of dust and water resistant models on the rack.

The smartphone is also promoting the new smartphone as big step on heath and wellness features with smart calorie counting and fitness tracking  apps that improve upon GS4.

Galaxy S5 is expected to arrive in the market in April 2014 but the company has  not revealed the price details of the new smartphone as of now.