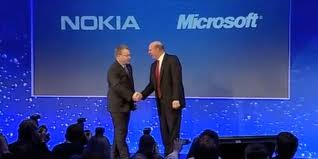 The news of Microsoft buying the struggling Nokia spread like a wildfire within hours and many thought Microsoft hit the jackpot with the deal. Although, it’s no news that the glory days of Nokia faded short after the launch of smartphones from Apple and Samsung and other Android smartphones from HTC, Sony and LG only added to the damage. Nokia has struggled to find its place among crowded iOS and Android smartphones market ever since.

Hoping to do something different once a mobile phone mogul Nokia choose Windows Phone as an operating system for its smartphone “Nokia Lumia” but the decision proven off beam for the company. Although, Nokia constantly came up with new designs and innovative technology for their phone it leg behind due to poor operating system that work as the brain for Nokia Lumia models.

While Nokia takes care of the hardware part of Nokia’s smartphone it is Microsoft’s responsibility to provide a world class mobile operating system to its OEM. And that’s the area where Microsoft has failed to deliver over the years. Both Nokia and Microsoft might have assumed that things will be different after Windows Phone 8 but the tile format of Windows Phone 8 was perhaps too little too late.

It took Nokia a while to understand but perhaps the company would have realized that continuing with Windows Phone might not be the best choice for them. On the other hand Microsoft could not afford to lose its most valuable client for Windows Phone  for OS wouldn’t survive without their biggest taker Nokia.

While Nokia had a choice to turn the table on Windows Phone and opt for Android, Microsoft had no such privilege. Therefore Microsoft rushed to buy a struggling Nokia for $7.2 billion to save their own mobile OS Windows Phone. Many technology pundit says that Microsoft would create the same magic as Apple by acquiring Nokia but with Nokia still hanging on to some of its patents we can’t say anything for sure as of now.