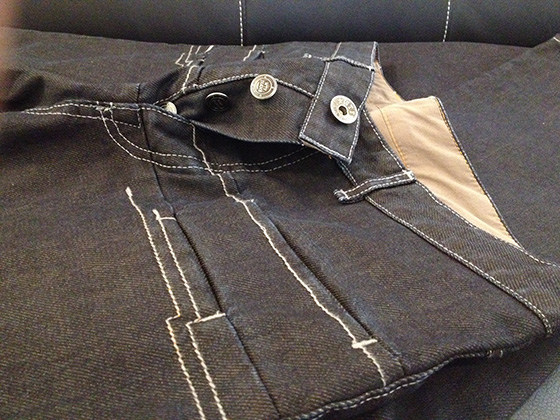 All the smartphone users, at least one time in their day’s work, think of clothing that can take proper care of their expensive device and at the same time protect it from water or other liquid substances.

However, the dream has kind of come true with and new ‘brand’ of jeans being manufactured by a Croatian company.

The idea just started as to make an easy access, while sitting, to the smartphone placed in the pocket, but the same thing turned out to be really innovative when people noticed the clean screen of the phone when taken out of the pocket. WTF! Was the reaction of the users and this how the WTFJeans started off in 2009.

The pair of jeans is specially designed for iPhones, but can also be used for other smartphones easily. The jeans pocked called WTF Pocket uses an exceptionally soft microfiber that ‘rubs’ the screen, cleaning it automatically because microfiber cleans on the micro-scale, wiping off oily fingerprints and smudges instead of just moving them around, like normal fabric does. The company also claims that the WTF Pocket also removes 3x more bacteria than conventional fabrics.

The company has recently launched a new line of its products put more innovation and technology to protect smartphones.

Although the USP of the new iteration of the WTFJeans is going to be the WTF Pocket with smart cleaning capabilities, radiation shield and a nano-layer also make it quite cool and protective for your iPhone.

The V3 version of the jeans comes with a nanotechnology based treatment that repels almost all liquid and oil based substances, and thereby almost eliminates the possibility of getting stains. Another addition in the latest version is the radiation shield that protects you from the radiation that cell phones emit. The manufacturers have fixed, inside the pockets, a copper-mesh-fabric based “shield” that deflects as much as 99.99 per cent of cell phone EMF radiation away from your body, without affecting the performance of the device. However, you will always have to remove this shield, before you put the jeans for washing.

Apart from these features, the company also offers customized designs and if you want to make the jeans with a customized massage it can also print a message up to 30 characters.