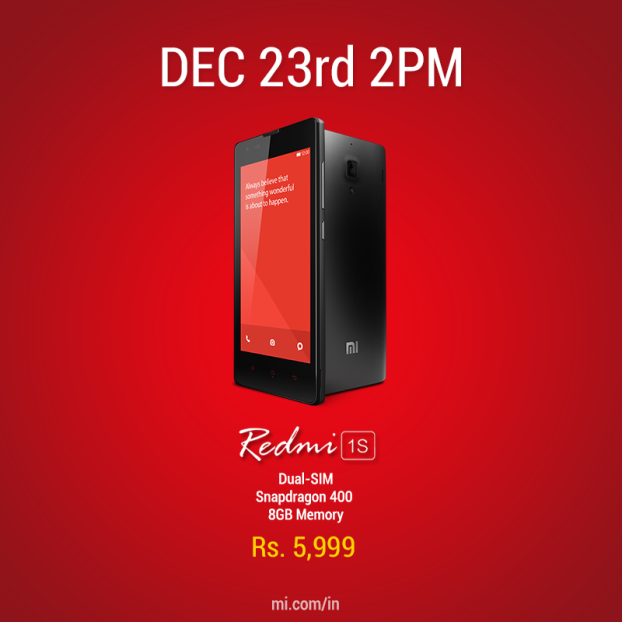 Xiaomi is going to heat up the online sales of smartphone once again as the company is going to bring its Redmi 1S device on Flipkart for sale.

The device will be available on Flipkart on December 23 from 2 PM and the registrations to take part in the sale are open now.

Getting a breather from the Delhi High Court, Xiaomi will now be able to sell its devices powered by Qualcomm processors. However, the devices which are powered by MediTek processors, will stay banned in the Indian market.

Tough the court order doesn’t give long time to the Chinese smartphone maker to keep the sale of its products on in the country; fans of Redmi 1S will get one more chance to get this one of the most desired device of this year.

According to the Delhi High Court order, Xiamoi will be allowed to continue the sales of its Qualcomm processor based device till February 5.

The Xiaomi Redmi 1S comes with a 4.7 inch 1280×720 pixel HD IPS display. The device is powered by Qualcomm’s Snapdragon 400 quad-core processor clocked at 1.6 GHz. There is 1 GB RAM supporting the functioning of the smartphone and you will get 8 GB of internal memory with a microSD slot supporting a card up to 64 GB. Redmi 1S sports an 8 megapixel rear-facing camera with LED flash and a 1.6 megapixel font-facing camera.

The Xiaomi Redmi 1S runs Android 4.3 KitKat out of the box with Xiaomi’s MiUI software and is available for Rs 5,999 only.

The patent issue between Xiaomi and Ericsson has disappointed many people who were waiting for Xiaomi’s Redmi Note phablet. As the Redmi Note is powered by MediaTek’s octa-core processor, the device will not be debuting into the Indian market.

However, Xiaomi chairman Hugo Barra discloses on his Facebook page that the 4G version of Xiaomi Redmi Note will soon be available in India.

“We are happy to announce that the Delhi High Court today issued a ruling in our favor, allowing us to resume sales in India subject to certain terms.

The good news is that Redmi 1S is coming back next week and we’ll be having our next sale on Tuesday, December 23. Registration will open shortly — keep an eye on the Mi India page for details!

We will also be resuming sales of Redmi Note shortly, with the 4G model this time. More details on that very soon, stay tuned!” Barra posted.

The Redmi Note 4G runs on Qualcomm’s Snapdragon 400 quad-core processor.  The 5.5 inch smartphone is going to be available for Rs. 9,999.