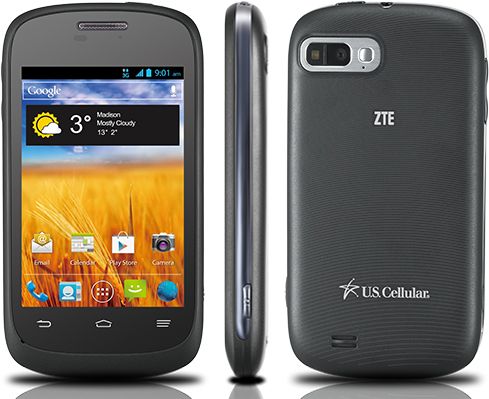 In its efforts to provide yet another lucrative budget smartphone ZTE has announced a new model named ZTE Director. The name sounds interesting but despite an attractive name the phone is just yet another mid range smartphone with no character whatsoever. The only advantage of the phone is its low price tag as it is available at US Cellular for just 1 cent. The phone comes at almost no cost with Contract on US Cellular. Despite its average looks and design the almost zero price tag of ZTE Director is going to attract a lot of US cellular users who are looking for a starting smartphone.

The latest ZTE model may not have a ground breaking technology but it has many features that first time smartphone users would like. Director’s  3.5 inch LCD screen has a poor display of 320X480p and pixel density  of 165 pixels.

ZTE’s latest model runs on a low budget Android 4.0 Ice Cream Sandwich and has a powerful Qualcomm single core 1GHz processor. The smartphone comes with 512 MB RAM and 4GB of in built storage. It has a 3.0 megapixels rear facing camera that clicks poor pictures. Other notable features of the phone include GPS, Bluetooth 3.0 and 3G. Overall ZTE Director is yet another average smartphone that would go unnoticed by technology critics. The phone might be a good choice for US Cellular users but if you planning to buy it without contract there are much better options in the $200 range.