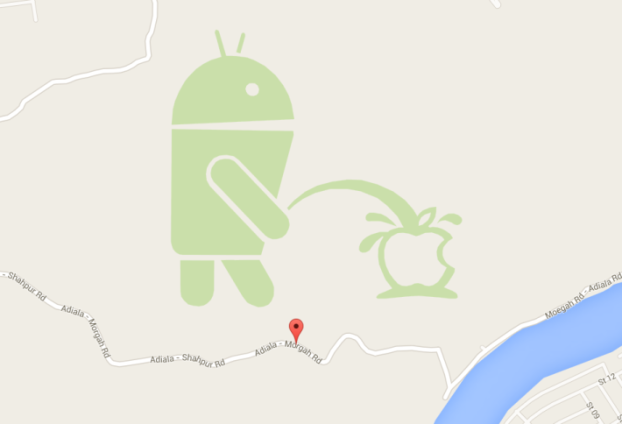 It looks like that the war between Apple and the Android maker Google has really gone dirty as an Android ‘bot’ has been found in an act that is going to ‘piss’ the Apple Watch maker off definitely.

On the day of Apple Watch release, an image of Android ‘bot’ peeing on an Apple logo was placed on Google maps at a location in Pakistan’s Rawalpindi.

The image was a user generated content and w as placed by some Apple hater and Google has got nothing to do with it. However, the incident raises questions over Google’s scrutiny of contents posted by users.

Google has finally come out in the open and has apologized for the incident.

In a statement in a Washington Post article, Google spokesperson Mara Harris said, “We’re sorry for this inappropriate user-created content; we’re working to remove it quickly.”

“We also learn from these issues, and we’re constantly improving how we detect, prevent and handle bad edits,” Harris said.

This is not the first time Google’s map has fallen prey to some trouble making users. Just a week ago a listing of Edwards Snow Den was placed in White House. It didn’t take much time for people to understand that the prank is directed towards the National Security Agency for which the famous whistleblower Edward Snowden was working for a long time.

Apart from this, Google’s Map Maker’s edits are not being scan and scrutinized properly as an another image was posted on Google Maps which says “Google review policy is crap”, challenging the Internet giant to have a look and revise its review policy for the map services. 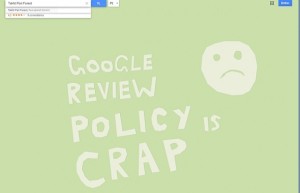