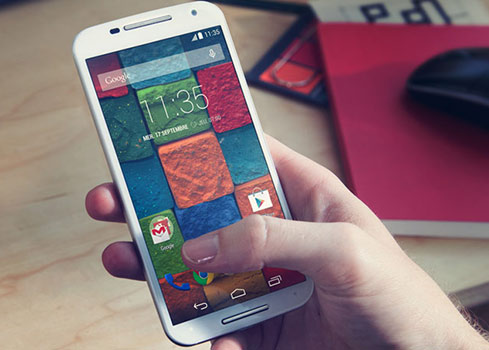 The successor of Motorola’s flagship Moto X smartphone has finally entered the Indian market and the device is better known as the Moto X second generation.

There are many reasons for you to get this device into your pocket but the main thing about the Moto X second generation is that it is bigger, better but costlier than its predecessor.

Here we post our first review of the Moto X second generation so you can decide better before making up your mind and spending that hard earned buck from your wallet.

The Moto X second generation and grown bigger from its 4.7 inch younger brother as it sports a 5.2 inch display with a resolution of 1080×1920 pixels at the pixel density of 424 pixels per inch. The screen is the AMOLED capacitive touchsceen protected by Corning’s Gorilla Glass 3.

The powerhouse of the smartphone lies in Qualcomm’s Snapdragon 801 quad-core processor which is clocked at 2.5 GHz. The processor is supported by whopping 2 GB of RAM and Adreno 330 graphic processing units which is going to give you a smooth experience with apps and other operations.

The earlier Moto X had only a dual core processor which was clocked at 1.7 GHz.

When it comes to camera the Moto X second generation has improved rear-facing camera which has a 13 megapixel sensor. The camera is coupled with dual LED flash lights and has features like geo-tagging, touch focus, face detection, panorama shot and HD video recording.

The front-facing camera is just like earlier with 2 megapixel sensor.

The Moto X second generation is available in 16 GB and 32 GB versions in the international market but for India only 16 GB version is available. Out of the 16 GB storage, users will be able to use only 12 GB as the operating system and the native apps use about 4 GB of storage.

The device is going to run Android 4.4.4 KitKat out of the box which can be updated once Google releases the next version of Andorid (Android L).

Motorola has shown its innovative sided in the Moto X second generation as it tried to concentrate of on the voice quality with the hardware performance. With the new Moto X you will not have the background noise issue as the smartphone is equipped with a 4-mic technology. Not only does this technology eliminate background noise, it also ensures that you are heard clearly whether you are in a crowded market or stuck in traffic.

Moto X second generation is juiced up by a 2300 mAh battery that can give up to a day-long performance of average usage.

The device is being sold exclusively by e-commerce major Flipkart in India and is available in four different variants.