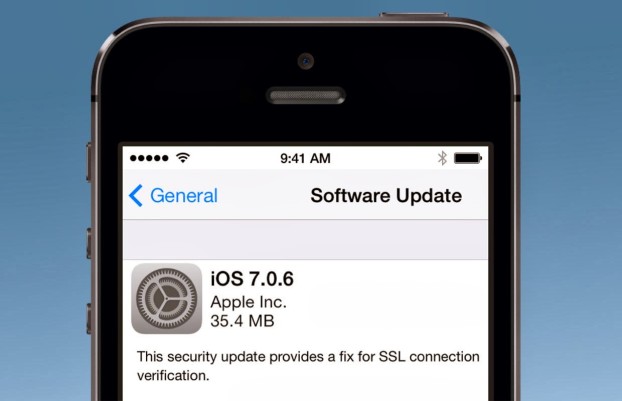 When users of recent iPhones like iPhone 5S and iPhone 5C were waiting for Apple Inc. to release an all new update of iOS 7, the Cupertino-based tech leader has released another minor update as iOS 7.0.6.

The update doesn’t seem to be carrying much updates with it, but according to the company, it does provides a fix for SSL connection verification.


At the same time Apple has pushed iOS 6.1.6 update for devices like iPhone 3GS and iPod touch (4th generation) which cannot be upgraded to iOS 7.

The hurried updated is obviously aimed to fix the SSL connection verification issues as Apple is all set to release its iOS 7.1 version of its mobile operating software.

iOS 7.1 is supposed to be coming with a lot of new features like car-related updates, interface tweaks, bug fixes and performance boosting changes. The next bigger version of iOS 7 has already been gone into the hands of developers and the Golden Master release of the iOS 7.1 is really not so far from now.

According to a report from Apple Insider, the release of iOS 7.1 can be expected somewhere around mid-March.

Although the update comes with a fix for SSL connection verification, many users are finding difficulties after updating their devices to iOS 7.0.6.

Many users of iPhone 5S and iPad Air have taken to Twitter and Apple’s support forum to post their problems and find little help to bring their devices back to life.

“Warning: Apple iOS 7.0.6 bricked my device. Loses all data, requires iTunes cable. Common occurrence for others also. Do not install!” posted one user on Twitter.

“Updated my iPhone 5s to 7.0.6 and the phone won’t turn back on”, a user posted on Apple Support.