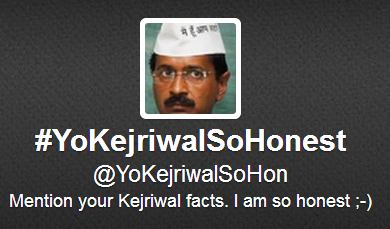 Thousands of Twitterati have come out in open to question the honesty of the Aam Aadmi Party leader on a lighter note but there are also those who are subjecting the ability and ambitions of the New Delhi CM.

Jokes like Arvind Kejriwal is so honest that he has filled complain against his “saali” for stealing his shoes at his wedding. And he charges for food at his own wedding reception has been retweeted by hundreds on Twitter India.

The Gray Muflar and pair of sneakers  which often share the frame with Kejriwal and AAP’s symbol “Broom” has become the keywords in most tweet with #yokejriwalsohonest.

#YoKejriwalSoHonest that if you put his grey muffler on old polluting cars they emit pure oxygen — vinaybasutkar (@vinaybasutkar1) January 12, 2014

The SMS poll strategy of AAP  is another popular pick among twitter users tweeting under #yokejriwalsohonest while some brings famous name like Raja Harishchandra and George Washington to pick on Kejriwal.

#YoKejriwalSoHonest he asks his family member to send sms before changing tv Chanel at his home.

#YoKejriwalSoHonest That We R Confused…. Who is more honest ? Arvind Kejriwal or Raja Harishchandra ?

#YoKejriwalSoHonest that After finding any bomb, He returns it to terrorists