If you are still looking for a good and high-performance smartphone, then LG’s new LG G2 can be one of your options. The device is going to be unveiled in India on September 30 during a company’s event in New Delhi.

The South Korean company unveiled the device globally last month in New York, but the market availability of the smartphone is still not made public.

The LG G2 is going to be in direct competition with smartphones like, Samsung Galaxy S4, Sony’s Xperia Z and Apple iPhone 5 and 5s. Experts are putting the successor of Optimus G Pro in the high price range that falls between Rs 40,000 and Rs 45,000 in the Indian market.

The biggest surprise LG delivers with this smartphone is that there is no home or power button on the front. The Korean tech giant has brought in a huge hardware innovation in the G2 as it puts the power key on the back of the device.  The button is placed between the volume controllers properly so it is easy for your index finger to control the volume and reach the power button. 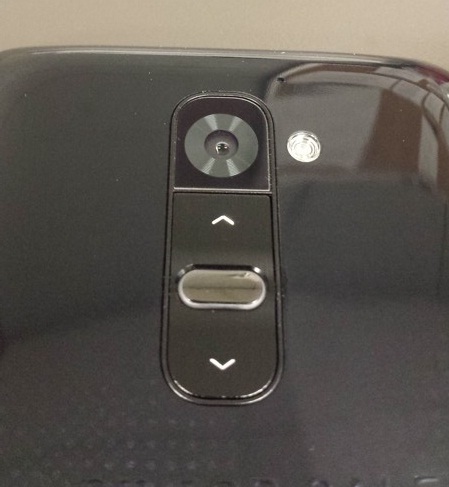 Power button on the back

The beast is powered by Qualcomm’s Snapdragon 800 quad-core processor clocked at 2.26 GHz supported by a 2 GB of RAM. The graphics of the phone are supported by Adreno 330 Graphic Processing Unit (GPU).

When it comes to the shooters, LG G2 will come with 13 megapixel autofocus rear-facing camera with LED flash. The secondary camera will be of 2.1 megapixel place on the front.

However, Indian buyers of the LG G2 will not get the features their Korean friends will be enjoying. The international version will have 32 GB of internal storage with only 24 GB of usable storage as the OS and native applications are going to eat up up to 8 GB of space. There will be no special slot for microSD slot.

The Korean version of the smartphone comes with a microSD slot.

The device will be juiced up by a mammoth 3,000 mAh non-removable batter. The Korean buyers of the phone will get a detachable batter along with a spare batter and charging station along with the normal power adopter.

The LG G2 will run Android 4.2.2 Jelly Bean out of the box that will soon be update to higher version of Android.

The company has already sent out media invitations for the September 30 event, and we will be closely looking at the event as to what new it can bring for LG’s Indian fans.