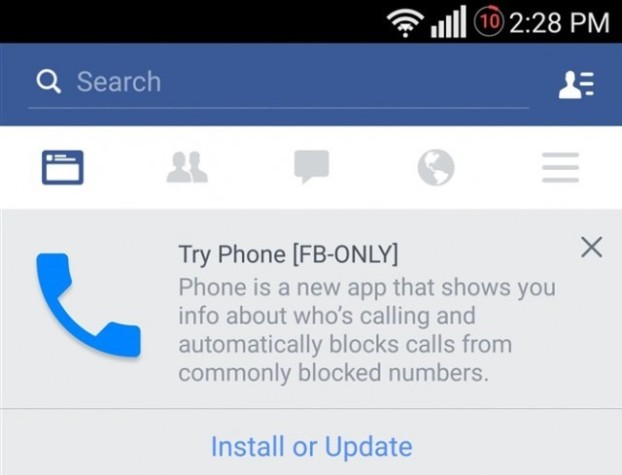 Facebook is testing a new call feature named “Phone” that lets you caller’s identity and automatically blocks calls from already blacklisted numbers. The social network already know our contact number through ‘Messenger’ app and Phone now appears to be Facebook’s next step to become an indigenous part of our daily communication.

The prominent [FB Only] sign on the leaked picture reflects that the “Phone” App is probably under early testing stage in Facebook lab. The image was first spotted by Android Police and later a Facebook official confirmed Venture Beat that the company is indeed working on “Phone”project.

From the look of it “Phone” feature appears to be an Android only native dialer feature that will be Facebook’s first App to coordinate with local network providers. At this point it also remains unclear whether the App is going to be a limited to Facebook contacts only or will serve as a regular native dialer instead.

Apparently Facebook already has voice calling for Messenger users and Skype powered video calling feature. But these features require both users to use of the social network’s platform to be able to benefit from the services.

It’s notable that Facebook owned messenger app WhatsApp recently rolled out voice calling feature for android users. The new feature allows users to make free voice call with the help of Wi-Fi or cellular data. While there is no direct link between WhatsApp Calling and Facebook Phone feature as of now one thing is clear that the social network is now eyeing the voice call industry.