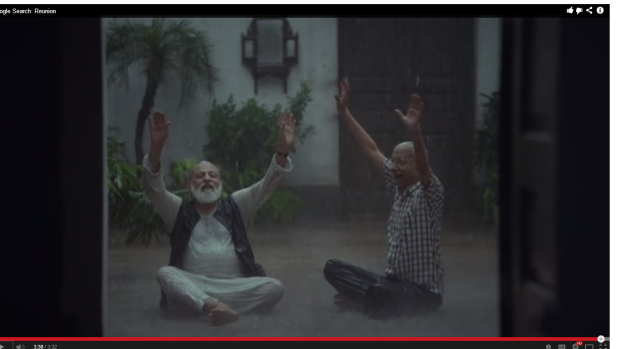 An emotional heartwarming commercial is not something you expect from a tech company but Google reunion ad has managed to pull it off. The new Google search ad campaign showcases reunion of two age old friends who get separated at the time of India- Pakistan partition. The touching ad was first aired on Television on last Friday and quickly got over 3 million hits on Youtube.

The tightly woven Indian-Pakistani reunion story is based in current New Delhi where an old man shares his childhood memories with his young granddaughter. While talking about his childhood in before partition Lahore (Now in Pakistan) he mention about his best buddy and partner in crime whom he didn’t see since 1947.

Moved by her Grandfathers affection for his childhood friend the granddaughter decides to bring back together on his birthday. And that’s where Google comes in. From finding places with small clues to looking for contacts for communication Google always comes handy. The ad has struck many emotional chords while showing its search engine efficiency.

When the Pakistani man gets the message from the girl he decides to go to India and his grandson gets everything in place with the help of Google search. Emotions start floating in the air as the Pakistani man knocks on the door of his bosom buddy and say “Happy Birthday Yarra”(buddy).

The fumbling voice and watery eyes of two age old friend is good enough to bring moisture to your eyes.

India-Pakistan is never an easy issue to handle but Google has managed the sensitive issue very well.  In small bits and pieces the campaign shows the similarities between two countries. The video was posted on Youtube on Thursday with a title “Partitions divide countries, Friendship finds a way.”

Google also started an initiative with this ad and posted this on its Google India Profile:

Google Search helps you find whatever you’re looking for.We’ve brought this idea to life in a short video with the backdrop of the#partition of India, showing how human passion and hope can overcome time and borders. In this story, a woman in India reunites her grandfather with his childhood friend (who is now in Pakistan) following six decades of separation with a little help from Google. We hope this is a reflection of the many stories of #reunion. If you find it moving, share it—and tell us your own story in the comments. #GoogleReunion

Thousands of people have shared the videos on social network which includes people from other countries who know little to none about partition.