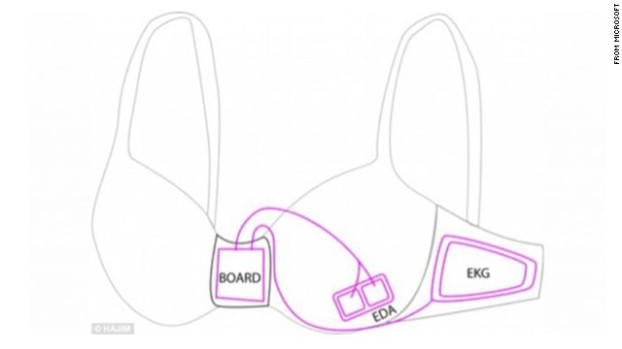 Samsung galaxy gear and Google Glass have already made wearable electronics a hot market but Microsoft has taken a different approach to it by making ‘Smart Bra’. According to the research paper submitted by Microsoft’s five researchers the bra has a psychological sensor that can help combat stress related bulge eating.

The researcher say the bra has several sensors that can figure out change in emotions, heartbeat and skin temperature that could be signs of stress. If that happens the sensor in the bra automatically sends a custom message on smartphone to warn about ‘emotional eating’.

According to the researchers the reason behind choosing a bra for the sensor is that the position of the bra works perfectly to detect change in heartbeat and mood. The prototype of the smart bra also has gyroscope and accelerometer so it will know its ‘emotional eating when you would dig into a big box of ice cream until it’s gone.

In the first phase of the study the researchers found out that in more than 75% cases the sensor work correctly to notify about ‘emotional eating’. However the project is not done yet as the researchers are planning to make the product more personalized. The next phase of research will analyze the wearer’s emotional changes in particular time frame to deliver more accurate and timely notifications.

Even though Microsoft is pushing this idea there is a lot to be done before they could roll out the smart bra. First, they will have to look for a better alternative to power this bra as the prototype currently has to be charged every 3-4 hours.

Microsoft is not ruling out man out this equation either as their research paper indicate we will continue to explore how to build a robust, real-world system that stands up to every day challenges with regards to battery life, comfortability, and being suitable for both men and women”.

Well, there you have it if the smart bra does become a success there is possibility you could see health conscious men wearing something similar on their chest.