Hoping to win back its customer Microsoft today announced its next generation of tablet computers Surface 2 and Surface Pro 2. The new Surface tablets have received a range of updates like brighter screen, improved key pad, enhanced kick stand, better battery life and most importantly a more polished operating system Windows 8.1.

Microsoft’s first attempt to enter the tablet market backfired the company when the original Surface and Surface Pro failed to meet basic demand of users like running old versions of Microsoft software and unavailability of social media apps like Facebook. Although the company fixed these issues one by one it failed to build a strong customer base in the process.

Microsoft has seemed to have learnt a lot from its mistakes as the new Surface lineup has fixed a lot of issues that bothered its customers last year. The cheaper Surface 2 is a mix of tablet and laptop and so is Surface Pro but as the name suggests the Pro is designed for professional use.

The old Microsoft’s surface has shed some weight for the lighter Surface 2 that has Nvidia Tegra Processor 4 to make the tablet run faster. The company has brighten up the new Surface’s display screen that has a resolution of 1920X1080 megapixels compare to 1366X786 megapixels found in older Surface.

The battery life has been pumped up by two hours as the Surface 2 promises up to 10 hours of battery life now. The only negative of Surface 2 is that it runs on Windows RT that restricts you to limited Apps designed for this lighter operating system. The starting price of Surface 2 is $449 and it goes up when you add accessories. 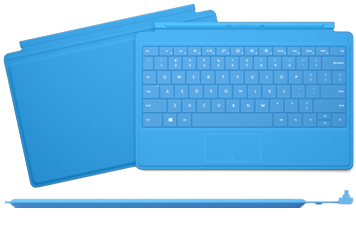 The lean machine Surface Pro 2 has the functionality of a laptop and the feel and looks of a tablet. It runs on the new Windows 8.1 that has simplified things for Windows users. It has 1.6 GHz processor and screen display of 1080p along with new and improved key board that gives Pro a cool look. The most important update in Pro 2 is the improved battery life that saw an improvement of 50-0 percent. Surface Pro 2 has a starting price of $899 for basic model.

To heat up the competition the company is offering free Microsoft Office including Outlook email with both the tablets. Microsoft is also offering free cloud storage of 200 GB on Sky Drive for two years. Both of these tablets will start selling in various countries from Octomber 22. You can also pre order it online on company’s website.