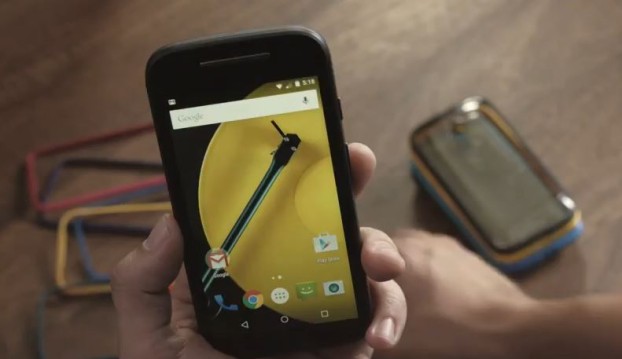 Mark your calendar Motorola fans the second generation Moto E is all set to arrive in India on March 10. Motorola India has already sent media invites for Moto E launch event that is going to be held next Tuesday in New Delhi. The smartphone is going to be available at Motorola India’s exclusive partner Flipkart.

The second generation Moto E The new Moto E second generation comes in two variant one that support 3G and is expect to be of the same price (Rs 6,999) as original Moto E. The 4G variant is expected to be little pricier as it packs better 64 gig Snapdragon 410 chipset in 1.2GHz processor compare to Snapdragon 200 chipset that powers the new 3G counterpart.
Although Motorola has not made it clear if the 4G variant of Moto E will be release in India or not and the price of the smartphone is also a guessing game until March 10. If we go by the price set for new Moto E United States the smartphone may cost around 1,000-1,500 more than Moto E 3G version.

Motorola has made a range of updates and upgrades in its new budget beast Moto E in almost every segment. The second generation Moto E sports bigger 4.5 inch display of 720p and comes with a VGA front camera that was missing in the original model.
The hardware and software section have also seen improvement as the new Moto E comes with doubled 8 GB internal memory and micro SD slot that is expandable for up to 32GB. Also on board is latest Android 5.0 Lollipop that is designed to simplify operation while boosting performance of budget devices.

Thanks to Motorola’s smart design the puffed up 2590 mAh battery promises mixed usage of 24 hours which is rare find at this budget price.