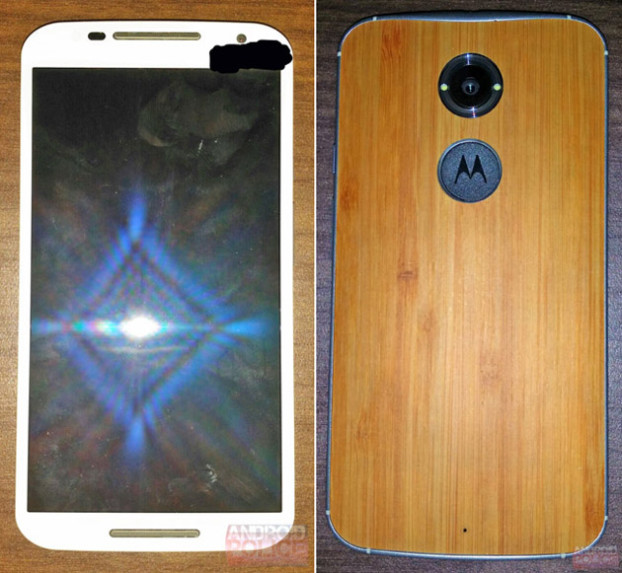 Rumor mills have been churning leaks about next gen Moto X model reportedly dubbed as Moto X+1 but for the first time some promising images of the same have surfaced on the internet.

Popular Android news source Android Police has got hold of some clear images that are supposedly the closest prototype of upcoming Moto X+1. The images shows front and back panel of a Motorola Moto X look alike model that has wooden panel framed in an aluminum rim which was missing in previous model.

Another design change in the new model is that the Motorola model looks embedded in the shown wooden frame compare to the printed one in Moto X. By the look of the display  size in Moto X+1 alleged images it appears that the rumors about a larger 5.1 inch screen in next Motorola flagship are true.

Earlier rumors of Moto X+1 also suggest that the new Motorola model will sport 12 Megapixels rear camera along with 2 MP front camera . It will be supposedly powered by Snapdragon 800 processor that will be clocked at 2.26 GHz and accompanied by 2 GM RAM. Moto X +1 will allegedly come with 32 GB internal memory and a micro SD slot to expand the memory for up to 128 GB.

As we mentioned earlier the images posted by Android Police are said to be the pictures of Moto X +1 before going into production. And since last Motorola flagship was launched in August last year the timing seems about right to start producing the Moto X successor.