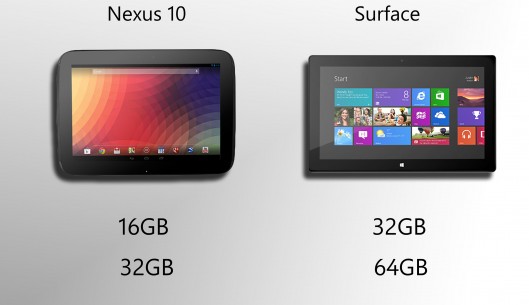 Google and Microsoft are two companies who do not see eye to eye on many things. But lucky for us they both decided to bring latest technology of 10 inch tablets at an affordable price. Both tablets come from the most trusted names in the world of technology but their affordable prices raise suspicion about their quality. Although cheap price may not always narrate the quality of the product and we can that about Nexus and Surface RT. If you are looking to buy an affordable tablet the choices can be overwhelming. This detailed review will help you decide which tablet better suits your needs.

Similar to other Nexus models ‘Nexus 10’ has a slim and light design. The tablet measures 10.4X&X0.35 inches and has round edges for easy handling. Thanks to its light plastic body the 10 inch tablet weighs only 1.33 pounds. On the other hand Surface RT is the biggest tablet available and it measures 10.81X6.77X0.37 inches and weighs 1.5 pounds.

Google’s Nexus 10 has a classic display of 2560X 1600 pixels that produce sharp a 300ppi image. The tablet’s high quality display is pretty close competitor of I Pad 3’s retina display. While Surface RT has a display of 148ppi that sometimes produces pixelated video.

You will always have your hands full of apps and games as long as you can access Google’s play store and Nexus gives license for that. The tablet has been designed to take advantage of many popular apps and games from its Play store. Microsoft’s Tablet on the other hand lacks on fun apps and games. The Surface RT only runs the apps available on ‘Windows Store, most of which are useless and old fashioned.

The Surface RT finally took a lead to Nexus 10 with its storage options. It is available in 16GB, 32GB and 64 GB formats while Nexus 10 has only 16 GB and 32 GB Tablets. Along with its basic storage Surface RT offers extra storage space of 7 MB in cloud. Moreover its Skydrive and microSD slot allows you to add extra storage of 64 GB. Nexus 10 on the other hand gives you several options for extra storage like 5GB space in Google Drive, photo storing in Google + and 10 GB storage in Gmail.

Nexus is high on performance but not so much on price as 16 GB Nexus 10 comes at $400 while 32 GB Surface RT also has a reasonable price of $500. The later reflect basic price of the tablets and updated versions might cost more than the starting value.

We have seen Google growing with time and perhaps the opposite will be true for Microsoft. Nexus 10 certainly stand tall to Microsoft’s Surface RT in the larger tablet section. It has a better design and functionality that gives you more for your money. Nexus 10 totally sweep the competition.