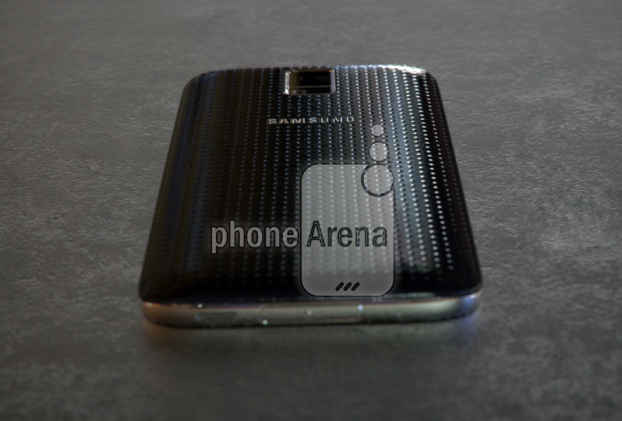 Samsung is always known for bringing out ‘spin off’ devices after it launches the new smartphone under its famous Galaxy series every year, and this year is nothing new.

According to a new report from Phone Arena, the much rumoured device has been seen in some leaked pictures that show the Galaxy S5 Prime clad in all aluminum body.

The Galaxy S5 Prime is expected arrive next month with a 5.2 inch 1440×2560 pixel display. The smartphone is rumoured to be powered by Qualcomm’s Snapdragon 805 quad-core processor coupled with a whopping 3 GB of RAM.

Though Samsung has said that there won’t be a more powerful model of Galaxy S5, all the rumours related to Galaxy S5 Prime make it ahead of the Galaxy S5.

Gaming enthusiasts are going to be very excited about the Galaxy S5 Prime as it is said to be using Adreno 420 GPU which is a higher version of Adreno 330 GPU currently being used in Samsung’s Galaxy S5 smartphone.

Samsung looks to be gearing up the Galaxy S5 Prime to give a tough competition to LG’s upcoming G3 smartphone which is slated for a release later this month.

The Samsung Galaxy S5 Prime is looking good in the leaked pictures with a metal frame and perforated back like of Galaxy S5. The curve at the back is clearly visible and the new design will give the users a perfect hold on a large device.

The major change what we noticed is the speaker position. The speaker has been moved from the back to the bottom of the device just next to the USB port.

The Galaxy S5 Prime is going to run Android 4.4.3 out of the box and might be available in Black, White, Pink and Gold colour variants.