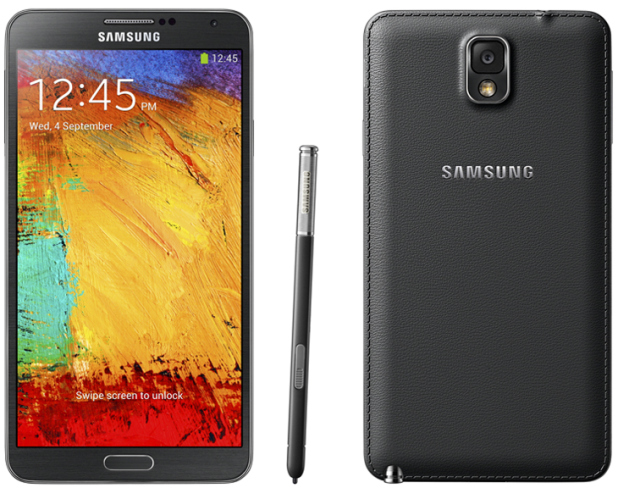 Bringing its new sensation to one of its largest market Samsung today announced the launch of Galaxy Note 3 in India. The phablet was launched globally in an event at Berlin IFA on September 4 . Samsung has declared that Galaxy Note 3 will be available at various retailers in India from September 25. The device will be available at the price tag of Rs 49,900 in Indian market.

Vodaphone carrier users can benefit from the introductory offer from Samsung which gives them access to free 2G internet services of 2GB data per month for first two months. The new kid from Samsung factory ‘Galaxy Note 3’ packs a lot of new features and updates that makes it the hottest smartphone in the tech town.

The poly carbonated plastic body that is found in other Samsung models just got an upgrade in Note 3 which is pretty and comfortable. It has a faux leather finish that has never been seen in any Samsung phone as of now. The new design makes it stand out among its other Samsung counterparts.

Like previous Galaxy Note models Note 3 is designed in a way so you can manage both official and personal stuff with it.  And Samsung’s security software Knox keeps your details,photos and confidential work files safe and secure. It allows users to differentiate their work spaces so they don’t mix their personal and professional information.

Similar to Galaxy S4 the new phablet from Samsung sports a Super AMOLED full HD display that has  a resolution of 1920X1080 pixels. However the display looks better on Note 3 compare to Galaxy S4 all thanks to its massive 5.7 inches screen that is .7 inches bigger than the screen on Galaxy S4.

Samsung has pumped up the competition with 3 GB RAM in Note 3 that is the first ever smartphone to have 3 GB RAM. That extra 1 GB of RAM will make watching videos and playing movies even better than before. The device comes with best in class Mali graphic card T628 which will give you the most amazing graphic display on Note 3.

Galaxy Note’s S pen is one experience that cannot be compared to any other smartphone/phablet on the planet. The famous digital pen of Note 2 has received some upgrade that makes it more functional and ease to use in Note 3.

Other upgrades in Note 3 includes Android Jelly Bean 4.3, 13 Megapixels rear facing and 2 MP front facing camera. The device is powered by 1.9GHz octacore processor and has standard 32 GB storage space that can be extended to 64 GB via Micro SD card.