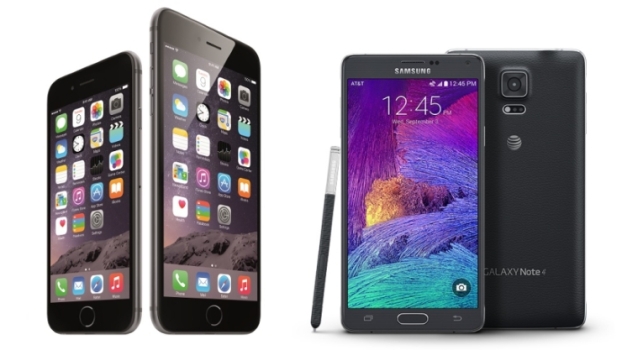 If Apple is the father of Smartphone the same title goes to Samsung when it comes to big screen smartphones. The Korean electronic major has practically created the phablet market and even today it stands as the best phablet maker but that might change after  entry of 5.5 inch iPhone 6 Plus. For long the arch rival of Samsung was resistant to launch a big screen smartphone but now that Apple finally has a player in the market it’s time to compare two almighty.

Galaxy Note 4 has a fresh look with its soft back cover and Galaxy S5 like design but when you match it up to iPhone 6 Plus the later steals the show. Ever since the debut of Galaxy Note back in 2011 Samsung has been improvising on the design but the 5.7 inch Note 4 looks more like a slab cut out from a tile. On the other hand iPhone 6 Plus boast seamless aluminum unibody design completed with slender curved glass that make this 5.5 inch beast look weigh less.

Although, both devices look sleek the bulk that comes with the size is almost unavoidable. The 5.7 inch Note 4 weighs around 176gm while the 5.5 inch iPhone 6 Plus 172 gm a slight different which might not be noticeable once you hold them in hand. Although it is Apple’s debut in the big screen smartphone market the company has managed to continue its design legacy from small to big screen this round goes to Apple.

Which one looks better, Ratina or AMOLED display is as much of debate as the bet between Android and iOS but in numbers Note 4 has got the edge. The Samsung beast sports Super AMOLED Quad display of 1440X2560 pixels that gives Note 4 massive 515 ppi pixels density coverage. The Apple big screen entry on the other side packs 1080X1920p Retina display that provide iPhone 6 Plus with 401 ppi pixels density.

Numbers gives a clean chit to Note 4 in this round but technically Ratina and AMOLED IPS display can’t be compared by just number. The contrast technique and ability to show more true colors work so different that you may not be able to tell the difference between iPhone 6 and Galaxy Note 4. However when it comes down to small details text and emojis would look much clearer on Note 4 so the Samsung flagship wins this segment.

Those who go by number might say that Apple’s 8 megapixels camera is no match to Galaxy Note 4’s 16 megapixels front camera and they can’t be more wrong. A good camera is a lot more than megapixels, hardware and design play a big role in a making a perfect picture and that’s where iPhone 6 Plus takes the lead.


The big screen Apple Smartphone boast DSLR like features, optical image stabilization and sharp auto focus that makes it one of the best camera in the market. Samsung also leaves no stone unturned in the camera department and equally puts OIS and slow motions video recording and top the case with 3.7 megapixels front camera. Both smartphone’s camera record 1080 p video but Note 4 also offers 4k recording that’s missing in iPhone 6 Plus. Overall it’s a tough call between these two, and unless we get to test Note 4’s camera in person it’s a tie.

Hardware segment is where the tussle between Samsung and Apple get to no end zone, Apple’sA8 chip is matched by Snapdragon 805 quad core processor in Note 4. Both devices pack best in class software and top of the line hardware. Galaxy Note 4 will feature Android 4 and a thick layer of Samsung UI touch wiz while iPhone 6 Plus runs on Apple’s best yet operating system iOS 8 that provide exciting opportunities for App developers.

Note 4 might soon receive an upgrade to Android L once Google release it in the market and that’s would be a fair time to judge the software. So it’s a tie again , but we hope Samsung would resolve Exynos legging issue in the new version that worried Note 3 Indian users.

When you have a device to watch, work and talk it tends to use a lot of battery and Note 4 nicely address this issue. With battery saving mode and swappable battery option Note 4 offers better choice for people who rely on their phablet while traveling.Apple also promises good battery life thanks to its energy savvy iOS 8 that runs apps smoothly with less power but phablet users are sure going to miss battery backup in iPhone 6 Plus. In spec iPhone 6 Plus has non removable 2195 mAh battery while Galaxy Note 4 sport 3200 mAh battery.