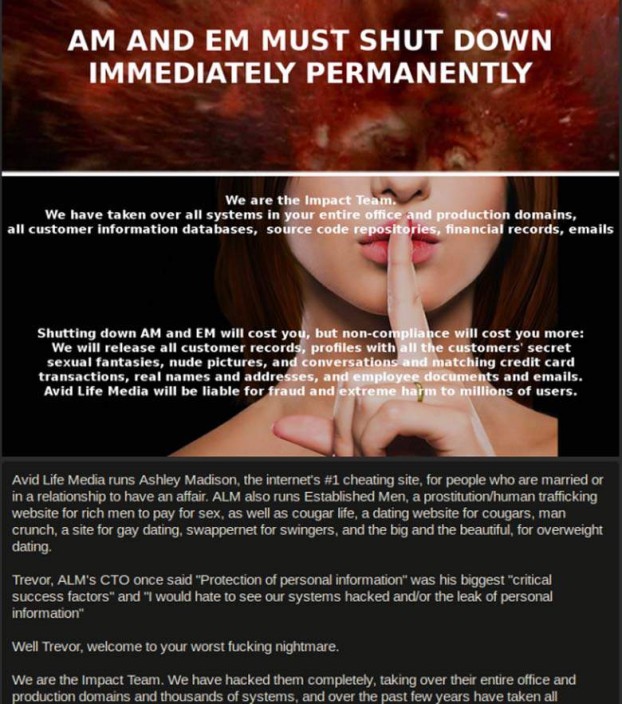 Politicians, state officials, corporates and thousands of cheating spouses were left red faced as Korea based hackers group dumped stolen data from adultery website Ashley Madison on web. The expose stirred up quite a storm on the web and in many lives when the emails and credit/debit card information of the cheating website users became public knowledge on Thursday.

‘Impact Team’ allegedly hacked the Canada based infidelity website and demanded its parent company Avid media to take down AM and Established Man. The media group that also runs various similar dating, adultery websites acknowledged that the hack was an inside job and launched a private investigation in the matter. But it was too late. Personal information and dark secrets of millions of users across the world were already in the hands of morality hackers.

When Avid media refused to bow down to morality hacker and did not shut Ashley Madison and Established Man the hackers made all of stolen information public. ‘Impact Team’ dumped all cheating spouses details on the ‘Dark Web’ that are private servers which need permission to access information. 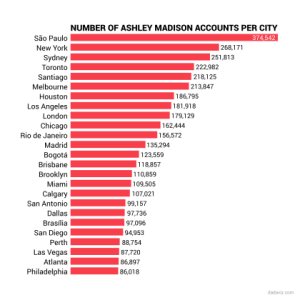 Within minutes of the data dump the impact started to show up. Numbers of people took it on social media to name and shame individuals who were listed at the adultery website. Shockingly many AM users registered their work email IDs with their account.
Dataviz analyzed the released data by the city which reveals that Brazil’s Sao Paulo has maximum 374,542 users. While New York City is at number two spot with 268,171 users. Other popular city that made it to top 10 includes Sidney, Toronto, Los Angeles, London and Chicago.
From the beginning on this hack and threat ‘Impact Team’ maintained that their main intention is to shut the infidelity website and not to misuse the gathered data in any other way.
“Avid Life Media [Ashley Madison’s parent company] has failed to take done Ashley Madison and Established Men. We have explained the fraud, deceit and stupidity of ALM and their members. Now everyone gets to see their data.” Declared the hacker group.