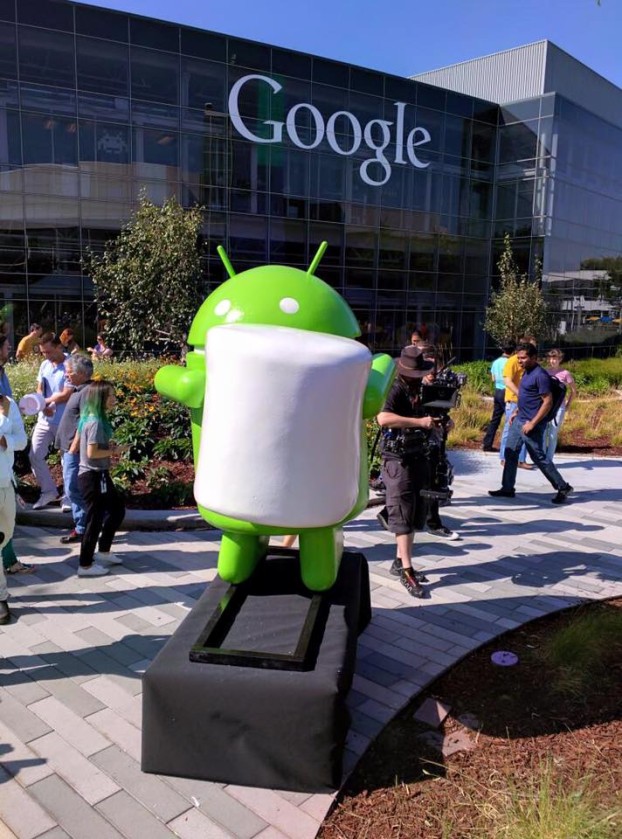 Its official! In Google’s Android dictionary M is for marshmallow. The web major finally put an end to the guessing game by revealing the meaning of later M in its latest mobile operating software Android M. Google unveiled a statute of its newest Android bot holding a giant marshmallow in its hands at Google’s Mountain View headquarter.
It’s unanimous that Google has a sweet tooth when it comes to naming its android software. Ever since the launch of very first Android version the company has made it a habit of naming every new version after a popular sweet treat in an alphabetical order. For example, Android 4.0 was named KitKat while the latest Android 5.0 is called Lollipop aka Android L.
The upcoming Android, Marshmallow was first introduced as Android M at Google’s I/O in May 2015 when the company gave a sneak peek of the next version of world’s most popular mobile operating software.

One might say what’s in the name? But Google has always been serious about naming its mobile OS in a non-serious (fun) way. However, apart from a name that reminds you of a soft and fluffy cloud Marshmallow is a pretty hefty package with bunch of advance features.

The new version of Android is loaded with tools that connect Google users with Android like never before. For example, Google’s one tap voice command search app ‘Google Now’ now has a designated place at Android device’s home button. Much like Apple’s voice assistant Siri, Google Now app can be activated on Android M with just a tap on the Home Button. The App is a voice activated version of traditional google search and works nearly as efficiently as the real thing.

Android Pay is another major feature that will be part of Android 6.0 Marshmallow. Android Pay is Google’s answer to Apple Pay that was launched last year and quickly changed market’s perception about mobile payment. Google is expected to launch the new Android software in fall this year.