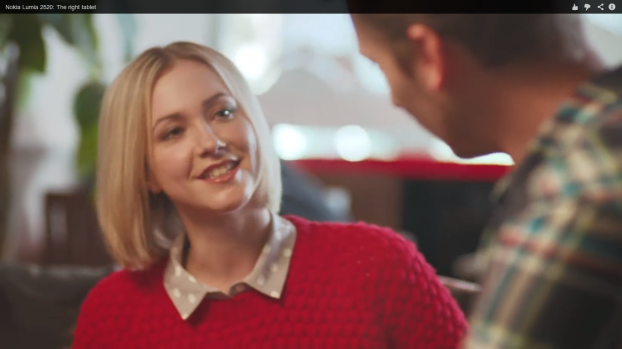 You might be bored seeing rivals bashing on Apple in about every single Ad they produce but perhaps it never gets old for them. In another such attempt Nokia has shown iPad Air as a put off for women in their ad for latest Nokia Lumia 2520 tablet.

As you would see in the Ad the guy at first seems proud of his new tablet that’s thinner than a pencil, we all know what that is”iPad Air”. But when a girl starts to ask question about the practicality and productivity he starts to think otherwise.

Like we said most companies think that bashing on Apple make their product pop and here Nokia plays high on the nervous geek card to top its case.

We have seen Samsung declaring Apple iPhone user members of a cult and Windows whacking iPads in comparision but the new Nokia Lumia 2520 ad take things to another level.

If you own and iPad or planning on getting one experts from Nokia tell you good luck impressing women with that! Well if you notice the girl in the ad is so smart she is using Nokia that has an attached keyboard and the man’s age old iPad Air (Actually Next Generation 2013 model ) which could also support external keyboard is supposedly plain dumb.

As if after seeing the ad all man are going to buy this argument that being cute and smart doesn’t cut it anymore if you own an iPad. Why? Because as we said before Nokia want you to believe that iPad put off girls. Yes, this is an era of creative advertisement!

Now for the the facts:

The latest Windows Nokia 2520 tablet that has a built in LTE comes at around $ 400-500 on various mobile retailers in US and its separate keyboard costs you another $150. However Nokia is offering the keyboard for no extra cost for a limited time.

On the other hand super thin iPad Air comes $499 and you can buy a third party keyboard to work with it starting from $75 dollars. Both tablets come at almost the same price Apple or Nokia the choice is yours.