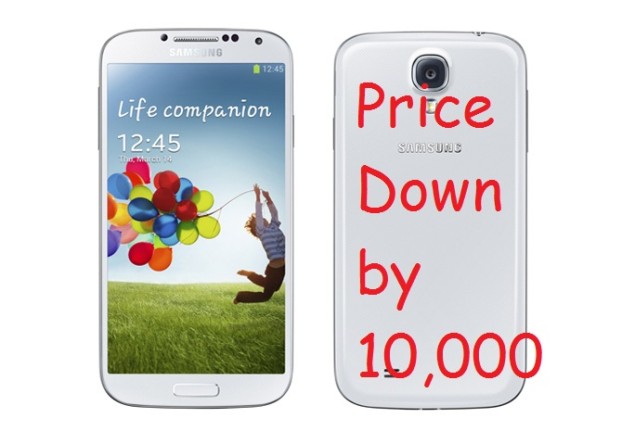 Before the next big thing from Samsung arrives in India next month the previous flagship smartphone Galaxy S4 price got down by a whopping number of Rs 10,000. The smartphone which was launched in India for 41,500 last year is now available for less than 30,000.

Samsung released the new Galaxy S5 in Mobile World Congress last week that is bigger in size and specs compare to Galaxy S4. Major online electronic retailer like Flipkart, Snapdeal and Amazon have listed the Galaxy S4 for 30,000 but if you look around chances are you might find a greater discount on less known e retailers.


Rumor has it that Galaxy S5 which has leather like finish on the back panel which is swappable might cost less than the original price of Galaxy S4.
The flagship Samsung Galaxy S4 is the second smartphone to get a whopping price cut after BlackBerry Z10 that got a big 25,500 price cut and now cost only 17,990.

All three high end Galaxy Smartphone S4, S4 mini and Note 2 have received big price cut in last 2-3 months. The successor of Note 2 is already out while the next generation model of Galaxy S4 is going to be available in world market on 11 April 2014.