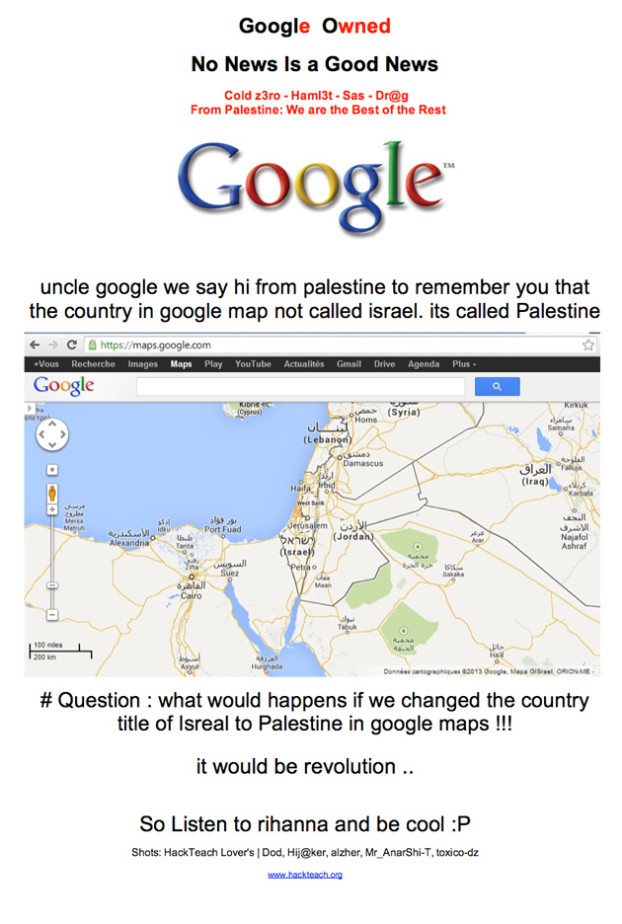 Many a times, we have seen Google marking wrong territories of countries in Google Maps and correcting the mistake after the point is brought into its notice. But in the case of its Palestine edition, the California-based search giant got the intimation with an advice to listen to Rihanna.

“Uncle Google we say hi from Palestine to remember (remind) you that the country in Google map not called Israel. It’s called Palestine,” the message read. Below the message, a screenshot of Google Map shows the marked territory of Palestine.

The message just doesn’t end there. Below the screenshot, the hackers say, “#Question: What would happen if we changed the country title of Israel to Palestine in Google Maps!!! It would be revolution ..So Listen to Rihanna and be cool :P.”

According to a TechCrunch report, most probably Google Palestine’s local domain was hijacked and redirected to a different server. The web publication thinks, “One current theory is that Google’s top-level domain provider for the region was compromised, allowing hackers to point the domain somewhere else.”

But one thing is clear that Google’s main servers were safe and uncompromised so other editions are not going to get affected by this attack.

Talking about the incident, a Google spokesperson denied claims of hack and told the TheNextWeb: “Some users visiting google.ps have been getting redirected to a different website; Google services for the google.ps domain were not hacked. We’re in contact with the organization responsible for managing this domain name so we can help resolve the problem.”

Google, in May this year, updated its Palestine search engine interface to display ‘Palestine’ instead of ‘PalestineTerritories’. The amendment came into effect after the United Nations changed its status re-classifying Palestine as a non-member observer instead of an entity.

This is the second time in this month when Palestine has surfaced in hacking related news. Last week a Palestinian youth made headlines when he hacked into Facebook CEO Mark Zuckerberg’s Facebook profile to draw his attention towards a security vulnerability in the social networking website.

Khalil Shreateh, a Palestinian ‘white hat’ hacker, found a vulnerability in Facebook’s security system and posted it to the social networking site’s security team twice. The security team refused to acknowledge the issue saying ‘this is not a bug’.

Frustrated with the security team’s response twice in the incident, Shreateh posted the same issue on Zuckerberg’s timeline by hacking into it.