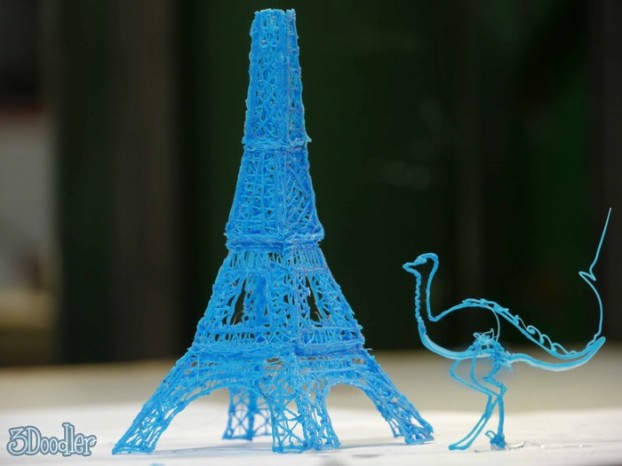 So far we have been talking about 3D printers and comparing them on the basis of price and performance. Now, there is something called 3Doodler that is going to make the 3D art easier and affordable for artists.

3Doodler is world’s first 3D pen that lets you write or draw in the air. The pen is not able to create objects like guns and designer bottles, but creating wire art kind of object is just a minute’s job for this new device.

3Doodler, practically, is a smaller and hand-held version of present 3D printers, but at the same time doesn’t require a computer or software for inputs. The pen uses ABS or PLA plastic as ink that cools and solidifies into a stable plastic structure as soon as it gets extruded from the pen. The pen works on external power source or 110v or 240v.

Though 3Doodler is easy to use, it is not recommended for children below 12 years. The plastic cools down as soon as it comes out from the metal point, but the point gets hot up to 270C and your fingers should always be away from the metal piece.

3Doodler, as it uses hot plastic, does release fumes but the amount is really negligible. However, the plastic used in the pen is ABS plastic thus the fumes are non toxic. According to Wobbleworks, “As avid 3D printer users we’ve also noticed that the fumes from the 3Doodler are significantly less noticeable than those coming from our 3D printers. In fact almost everyone who has tried the 3Doodler to date has failed to notice any fumes at all.”

The pen is 180mmx24mm in dimension and weighs little lesser than 200 grams. The crew at Wobbleworks worked hard to make 3Doodler user friendly and performance efficient. If you are looking forward to buy this free-hand portable 3D printer, you will have to shell out $75.