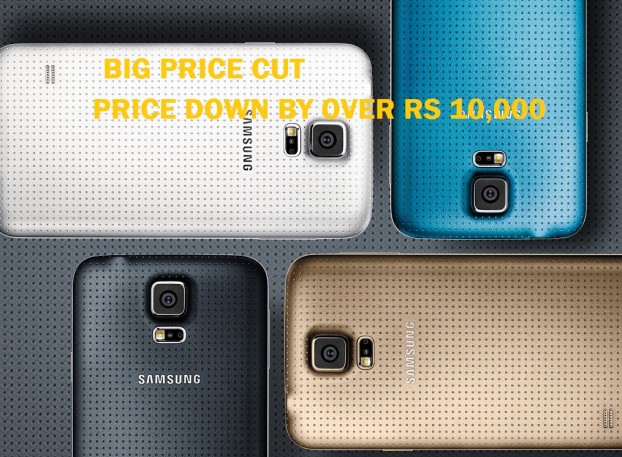 Owning the latest flagship Samsung Galaxy S5 has just become cheaper as price of the Smartphone dropped over 20% in just 2 months. The Korean electronics giant had launched its Smartphone in Early April for Rupees 51,500. But the smartphone is now available at over 10,000 discounted prices on many online retailers.

Popular e-commerce website Snapdeal is selling the Shimmery White model of Galaxy S5 is available at Rs 39,339 while the Copper Gold variant is available for Rs39,637. The Charcoal Black variant of the smartphone is also selling below 40,000 price point at 39,721 rupees.

Another well known e-commerce biggie Flipkart is also selling Galaxy S5 for 21% percent discount. The price reduction in Galaxy S5 may also be available at your local mobile stores so make sure to check the exact price cut at your close retailer before you purchase the smartphone.

Such a big price fall in the period of two months is not a good sign for Samsung who was hoping great demand for Galaxy S5. But despite its appealing design and loaded features Galaxy S5 received a cold reception in India.  Recently the Design chief of Samsung Mobile resigned from his position and the news was linked with the poor show of Galaxy S5 in market.

Along with over 20% price cut many e-commerce websites are offering freebies with the purchase of Galaxy S5. However, the official website of Samsung India hasn’t dropped price of Galaxy S5 but they are trying to lure consumers with buy back offers and over 5,000 of Samsung cash in deal.

Galaxy S5, the latest high end smartphone from Samsung stable has a fresh new look with leather like colorful plastic back that sets it apart from other Galaxy models. The smartphone also features; finger print scanner, heartbeat monitor and dozens of new features.
Also read: 5 Unique features of Galaxy S5 that no other Samsung Galaxy model has