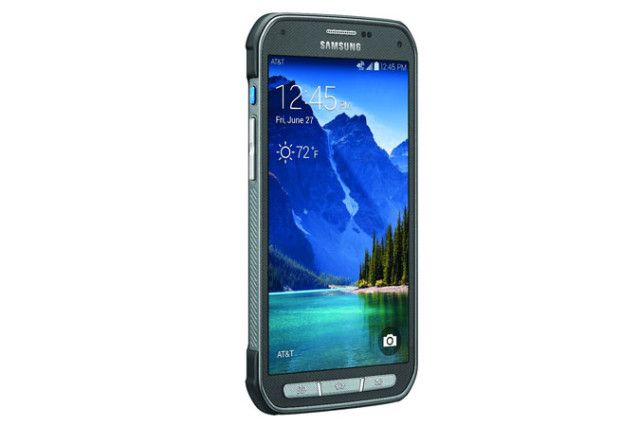 Out from the rumor cloud Samsung Galaxy S5 Active is a real thing now as it become available to purchase in US. The long expected rugged version of Galaxy S5 made its way to the US network provider AT& T today and it will be selling for hefty $714.99 price tag.

Galaxy S5 Active is an improved version of Galaxy S5 but it shares a lot of feature with the basic flagship model. It has adopted the 5.1 inch super AMOLED display, 16 MP camera along with water and dust proof IP67 design of Galaxy S5. Although it’s unclear if Galaxy S5 active has the finger print scanner featured in basic flagship.

What sets the two smartphone apart is the somewhat metallic look and shockproof MIL-STD (Military Standard) 810 certified rugged body in Galaxy S5 Active. Another fresh feature in the new version is the added convenience key on the side that brings handy apps like barometer, flashlight on home screen with touch of a button.

The prominent features in Active like 2.5 GHz Qualcomm Snapdragon 801 Processor, 2 GB RAM,  expandable memory slot for up to 128 GB and 2800 mAh battery are same as Galaxy S5.

Last year Samsung Galaxy S4 was well received thanks to its rugged design but now that the original Galaxy S5 has water and dust proof design it might affect Galaxy S5 active’s chances. However, loyal Galaxy users who are looking for a metallic look may find something exciting in Galaxy S5 Active.

The Camo Green variant of Galaxy S5 Active is exclusively available in US at At&T network provider currently. The Galaxy S5 Active will also be available in Titanium Grey and Ruby Red and will cost $200 with a 2 year cellular contract. Although, there is no official confirmation on global availability Samsung is likely to roll out the rugged model in global market in coming weeks.